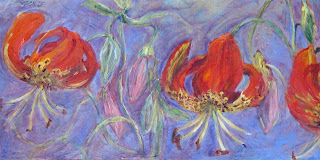 It has been a bit bleak with grey skies and gloom  until we had snow but that was not much better. I had to go out and put pots covering all the hellebores to save them from frost. Since then, I have been working on a entry for Public Art for wrap-arounds for utility boxes. I submitted all florals as I thought they would be cheerful and it would be nice to see flowers blooming instead of a lumpy green box. This is one I submitted- "Red  Lilies" - a tall batch of lilies growing in my garden. I am looking forward to having flowers blooming again and thinking of different combinations that would make nice bouquets.
I may very well have flower paintings for next November's GuessWho? art show. The paintings are all 10x10 on thick canvas or board and all sell for $100- so I'm suggesting to all and sundry - and doing it myself too- that we take an envelope, mark "10x10" on it and put $10 in it each month. Since October is the 10th month, that means that for the beginning of November (and this year's sale is on November 7th), there will be $100 in the envelope and saving it will have been relatively painless.

Posted by Loraine Wellman (lorainewellman@shaw.ca) at 2:41 PM No comments: 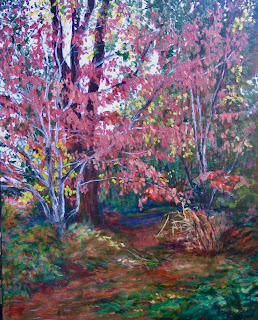 This is the painting that can be seen- in part, because the template cuts it to fit the space- on my December newsletter. It is basically part of my back garden and I had a great time building up the foliage. The dark tree is "tulip tree"- liriodendron. When we planted it, we were told it would grow to around 30 feet. The nursery was assuming we would be moved in 10 years and I didn't own my "big book" of plants. Well, some 50 years later it is over 90 feet and not quitting yet. An arborist told me it is one of the tallest trees in the Eastern forest. The trunk is over 17 feet in diameter - but I do love it, large leaves, falling cones and all. The blossoms are now too high to see them clearly. At one time, some large green parrots, native to Northern India that were somehow flying free, used to come and sit in the tree and eat the cones like corn on the cob. Unfortunately, they are no longer around.
I chose this painting for my Christmas card this year, too. Autumn, not winter, but nice and colourful. I call it "Autumn Tapestry"
I read an interesting piece on the internet today that looking at art can actually be good for your health as it bumps cortisol and serotonin levels in the brain and produces an effect in the body similar to exercise. The British Medical Journal on December 18, noted that going to art museums twice a year lowers early death rate by 14% while culture vultures do even better at 31%. Apparently, hanging paintings in hospitals improves patient satisfaction, health outcome, length of stay and pain tolerance. I often hear from people who have really enjoyed seeing paintings of mine in Richmond General Hospital. I'm glad to hear that they have enjoyed them - but now even more pleased to think that they might even have helped them!
Maybe everyone should also have paintings in their homes- which is what artists would like to see. And a quote from Nathalie Bondil "I am convinced that in the 21st century, culture will be what physical activity was for health in the 20th century."
Posted by Loraine Wellman (lorainewellman@shaw.ca) at 7:52 PM No comments:

On Tuesday, December the 3rd, Richmond Artists Guild will be hanging a show in Gateway Theatre. The show will all be related to the end of year musical " Joseph and the Amazing Technicolor Dreamcoat". This production is, apparently, not so Egypt-oriented as the Donny Osmond show that comes to mind. It is, of course, still with the story based on the Biblical tale of Joseph, his coat of many colours and his dream interpretations but, the staging, we are told, will be more dream-oriented and an emphasis on the musicality. I decided it would be a good  reason to paint a picture of a clarinet - which I think is a very interesting looking instrument... something about all those silver keys! It turned out to be an interesting challenge as it had to be accurate - but I didn't want to end up with something that looked like it was cut out of a musical instruments catalog. I wanted the background to be a bit magical and musical looking - but with nothing so basic as musical notes. I used some "interference" white/blue on the  clarinet keys. This means that the colour shifts a little as you look at it- adding another element to the painting. At the beginning stages, I was afraid it might not come off as I had hoped... but I ended up being fairly pleased with the result. I hope others enjoy looking at this painting.
Posted by Loraine Wellman (lorainewellman@shaw.ca) at 7:59 PM No comments:

Here is the pen and ink with watercolour wash  of Giving that I did for our Cultural Days event at the end of September. Now we are having "Long Poses" again on alternate Fridays and I'm working in mixed media. I like to have long enough to work on a piece as a contrast from regular Life Drawing sessions where poses may be much shorter...the first ones are one-minute poses and the longest usually 20 minutes. This one was roughly two and half hours - allowing for the model breaks. The other photo shows the distance I was from the model as well as a bit of our outdoor set-up. Fridays are indoor sessions but for Cultural Days we were outside where visiting public could watch or  participate. 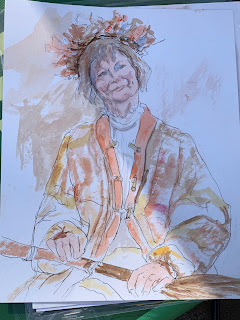 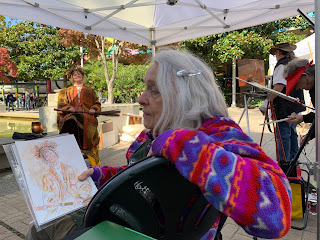 Posted by Loraine Wellman (lorainewellman@shaw.ca) at 3:00 PM No comments: 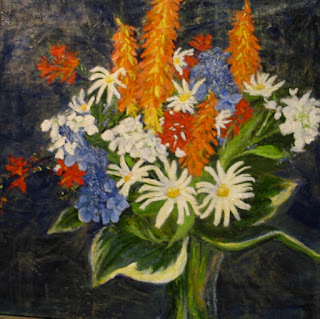 Here is the newest bouquet painting and it is a very special bouquet. Carol-Lyn Sakata brought it to me from flowers from her mother's garden, which is to be redeveloped. This is the garden that is the triptych painting now in Richmond General Hospital. I've never painted red-hot pokers before- never seen any for sale in a florist and I don't have any in my garden. Also, it was so lovely to get such a beautiful bouquet so nicely arranged and with such a nice assortment of flowers. It was both a challenge and a pleasure to paint. The painting is 24 x 24.
Posted by Loraine Wellman (lorainewellman@shaw.ca) at 8:43 PM No comments:

DoorsOpen on June 1st and 2nd 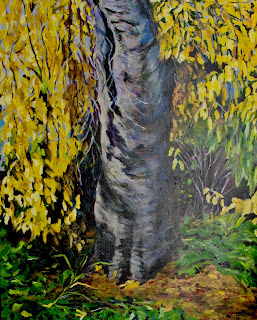 Here is a new one - 30"x24" that I will be showing for DoorsOpen this coming weekend - June 1st and 2nd. It is a dance of golden birch leaves around the old trunk in the fall- based on a tree in my garden. I say "based" because every painting gets adjusted for what the painting wants and so, varies from what a photograph might show. There should be more of an individuality to a painting - a feeling of "hands on" that a photo can't show. And of course,  seeing the actual painting is different again from seeing a photo of the painting. One of the nicest compliments I ever had was a collector telling me that every time he looked at a painting I had done, he saw something different again. so, whether it is this painting or a different one, take a good look at an actual original painting and enjoy the difference.
Posted by Loraine Wellman (lorainewellman@shaw.ca) at 3:50 PM No comments:

Email ThisBlogThis!Share to TwitterShare to FacebookShare to Pinterest
Labels: adjusting to what a painting wants, birch tree in fall, differences from photographs to paintings, interpreting a photograph, seeing a painting compared to seeing a photo of the painting 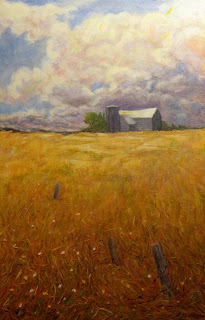 This is my painting currently showing in Gateway Theatre as part of the group show "Pastoral". It is running through April 28th and can be seen, even if you aren't attending a performance, from noon to 5pm by entering through the box office. The art show is a tribute to Canada's rural heritage and also features the following artists: Dale Byre, Jennifer Heine, David McHolm, Bonita Ruttkay, Pat Thorson, Larry Tillyer and Jeff Wilson.

The painting is partly based on reality but I also exaggerated the expanse of the field from remembering how far across field could seem when I was a child. I really enjoyed painting those clouds. I hope we have some nice skies again this summer - and not forest fire haze!
Posted by Loraine Wellman (lorainewellman@shaw.ca) at 4:12 PM No comments: