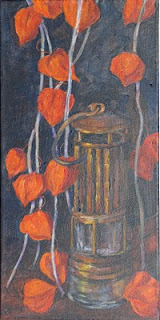 I was up at Omega Gallery today - and noted that traffic definitely seemed lighter. Could it be that more people decided that the Canada Line is the way to go? It certainly makes it easy if you are going downtown but it doesn't work for going to Dunbar with canvases in the trunk! Tien Ching decided to keep five for now. One is "Blink" from a couple of blogs ago and one is "Lanterns" which I'll post here. The miner's lantern is a real one that was actually used by my Dad at Coleman, Alberta. Later, he wired it so it could be used as a lamp. I don't actually use it but I'm glad to have it as a bit of history with a personal connection. Tien is not displaying these paintings right now but a person can always ask to see them! This was interesting to set up - first I had a lighter background because I liked the cast shadows of the lantern plant (Physalis alkekengi ) but then it didn't seem right to have a miner's lantern sitting out in the light, so I re-draped the stand and settled on the darker background. After adjusting the light, I was fairly pleased as I felt it captured the glow that lanterns provide.
Posted by Loraine Wellman (lorainewellman@shaw.ca) at 5:07 PM