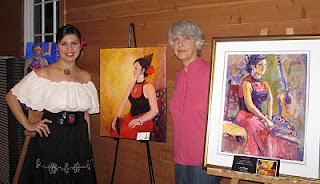 Steveston Folk Music Guild put on a very enjoyable evening's entertainment on the 21st. Marvin forgot his picture (!) and Rita hadn't finished hers, but Bonita, Adrienne and I took our paintings of Elsa for display. Elsa was really pleased with them all.Each one was individual and captured different aspects of the model and the idea of performance. In the photo, Bonita's painting is just peeking over Elsa's shoulder. It shows the drama and ambiance of performance. Adrienne's is in her colourful style. In mine, I wanted to have a lot of warmth as well as the sparkle of the model. Elsa has a wonderful voice and can do those "trills" to perfection. (Do not expect knowledgeable music critique from me!) - Jose Gimenez is Guitar in the duo - Sangre Morena. Songs from many Latin countries were performed and Elsa often made variations on her costume to suit the country. There was a good crowd out- even on a rainy evening!
Posted by Loraine Wellman (lorainewellman@shaw.ca) at 8:51 PM

Your photo points up something I love about open studios: everyone is painting the same thing but in such very different ways!