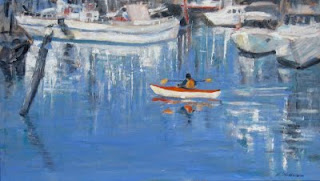 I don't usually blog about anything except art and art events, but I am rather sickened by last nights rioting after Vancouver lost the Stanley Cup Hockey final. These are the same streets I walked on as a child after Saturday morning art classes. This is where I prowled with sketchbook later on, as a student at Vancouver School of Art. This was just a hockey game, not a plea for democracy. As The Guardian newspaper notes, it makes us look like a fishing village, not the "world-class" city we claim to be. Politicians are saying it was a few yahoos and punks, but the hockey fans inside the arena showed a distinct lack of class and decency when they booed the Bruins at the end of the game. Where was the sportsmanship in that? After the violence and looting on the streets, while spectators filmed it all, Vancouver ends up with a reputation it will take a long time to live down. There is no point about extolling the virtues of a "livable city" and its natural beauty when its citizens end up looking like jerks and worse. .....For the record, I was at Wednesday night Life Drawing and not even watching TV!... painting is of a kayak just by Granville Island- I call it "To Each His Own" and it is a calm and peaceful view in Vancouver.
Posted by Loraine Wellman (lorainewellman@shaw.ca) at 9:35 AM