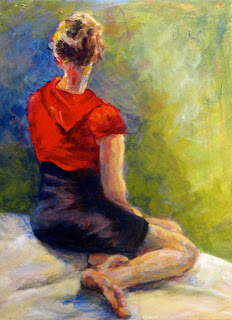 The blog has nothing to do with the above painting- it is there because it is one that I did at the October figure painting workshop. It was mostly done in about three hours from a model - and then re-visited part of the final day when we went back to look at our work and decided what needed adjustment. The background is entirely from the imagination as there were actually other painters standing at their easels. I used it to emphasize where the main source of light was and to work in harmony with the colours of the model and her clothing.
What has been interesting me lately has been the attention paid to Lawren Harris because of the exhibition of his works, arranged by actor and collector Steve Martin, in Los Angeles. Also, the record-breaking sale price of one of his paintings attracted much press.  I was interested to see Russell Smith writing in the Globe and Mail that he personally does not like Harris' work at all. "I find his stylized, glowing, bulbous glacier-scapes to look a lot like children's-book illustration. Very good children's-book illustration, sure- pair them up with a nice story about a dog and a seal and you'd get yourself a Caldecott Medal." I thought that was quite funny.  Nobody wrote in demanding Smith's head - which was interesting in itself as so many of us grew up with the silk screen prints of Group of Seven works in school hallways. Apparently this silk-screen proliferation of Canadian landscape was part of the government drumming up Canadian patriotism for World War II.  I also grew up seeing originals in the Vancouver Art Gallery when I attended Saturday Morning Art Classes there.  On a personal level, I like some of Harris' earlier works best - street scenes mainly.  The mountains tend to be a little bleak for my choice- maybe a little too stylized. Again, however, it is personal choice and the Group of Seven will probably always have a special appeal for most Canadians. We each should feel free to assess how we really feel and respond to the paintings - which isn't easy when the legends are so much a part of our experience in Canada.
I'm reading - in bits because there is so much to it- "Portraits- John Berger on Artists", edited by Tom Overton. John Berger is one of the world's most celebrated art writers and the book is composed of many of his reviews and other writings.  He wrote a review of a show of Henry Moore's sculptures in which he said, among other things " a life-size "King and Queen", with crowns like jug handles to their heads, bodies that are scooped out, winded, and smacked flat like kippers..." Then he recalls in a piece written later,  "Moore's  work was uneven. He produced, in my opinion, his weakest sculptures during the period when his work was most in demand and most critically unquestioned. I remember that towards the end of the fifties, when I had the temerity to write critically about his latest work, I very nearly lost my job on the "New Statesman". I was considered a national traitor!"                            -and so we see that it is not easy to take a fresh look at venerated art. The other side to that, of course, is that when certain art gets the spotlight, collectors want it for the signature- and, often, how much it cost. Art and the art market are two different things.