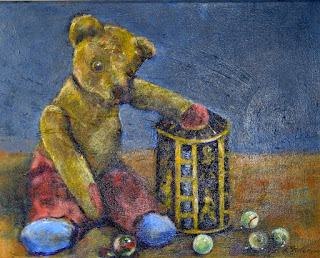 According to today's  newspaper, teddy bears first appeared in a store window on February 15, 1903. The inventor was Morris Michtom who named his stuffed toy after the then-U.S.President Theodore Roosevelt. Teddy Bears are now a $1 billion industry in the United States. This well-worn bear would be close to 90 years old as Teddy was sent from England around 1927. It belonged to my husband and was obviously well-loved to the point where he needed patched paws and feet as well as  trousers for his worn legs. I thought it would be fun to paint him with an old bank that belonged to me as a child - and then he needed some marbles to play with. I think he turned out well and shows his true personality.
I painted this a short time ago - before the current "City Evenings" series, one of which was the last blog.  I am still continuing them but this seemed a  good day to feature Teddy. Modern bears can have quite different features and colours as well as safer eyes. I'm sure these eyes are the dangerous stick-pin eyes but I think it is fortunate that he does have the original eyes and I like the definite old-fashioned snout. The bank features columns for different coins and pictures of industriously saving children with coins and bags of money.
Posted by Loraine Wellman (lorainewellman@shaw.ca) at 5:12 PM