A new box of colours! 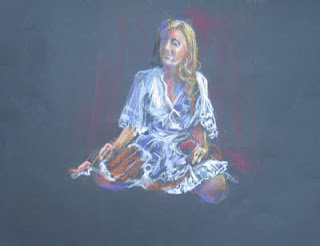 Most people remember the beginning of a school year and the excitement of a new box of crayons. For artists, this excitement doesn't end with the end of school years. Every new tube of paint, different pen or new media is a fresh thrill. I just got a new box of 48 colours of conte' crayons. I often draw quick poses at Life Drawing in sepia or black conte' and I've used some other colours for long poses. However, this is my very first box of 48 colours. It came in the mail and when I opened up the package, the colours were so enticing I felt like licking the plastic cover! Conte' is a hard pastel, rather than a soft pastel - so not so crumbly but still very nice to work with. You can blend it and layer it to build up colours. Last night, Iva posed in a costume from Bohemia. I did a 30-minute colour sketch on black paper. Why black? Well, I was at the end of one assorted pad and down to four black sheets so felt I *should* use at least one before getting a new pad. When I started, I was afraid I'd made a mistake using the black - but decided to take a "what the heck" approach and charge ahead. It was only one sheet of paper and thirty minutes of time. As I progressed,it started to turn into fun and I ended up reasonably pleased... although I must say not a great resemblance to Iva who looks much plumper than in real life. A couple of more assorted sheets plus at least one more black and then I'll open the new pad of coloured pastel paper for fresh excitement!
Posted by Loraine Wellman (lorainewellman@shaw.ca) at 9:17 PM