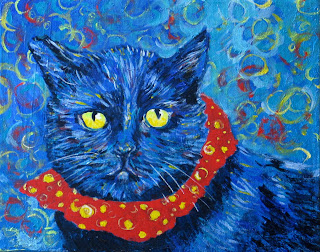 Digby wanted to be a colourful black cat, just like his sister Isabella in a previous post and on the August newsletter- so here he is. He is a very sweet little cat although a bit high-maintenance at times. He got scared by a dog the other week and went up a tree before realizing that he doesn't have the greatest balance as he has no proper tail. He  has condensed vertebrae and has no real neck either and is generally a bit boxy looking. So he had to be rescued.  A few nights later, he was keeping me company in my studio when he heard the new neighbour's dog bark. Digby growled to express his opinion of dogs in general.
Next major event is the Grand Prix of Art- billed as the top painting event  of the year in Richmond. It really is. As many as 100 artists will be out painting in a three-hour "race" at locations that have been drawn by lottery. I keep hoping I'll get Prickly Pear nursery and I carry kibbles in my pocket  to bribe the resident cats to pose - but no luck so far!  The public can walk around Steveston to see the artists in action and then view the finished paintings at the Bunkhouse in Britannia Shipyards afterward. The "race" day is September 21 and painting is from 10am to 1pm. The Gulf of Georgia Cannery whistle will be set to blow again at 1pm.( It blows every day at 12 noon. )There are prizes awarded by judges as well as a People's Choice award that won't be known until the exhibit finishes on the 29th. There is more information at www.grandprixofart.com
Posted by Loraine Wellman (lorainewellman@shaw.ca) at 9:59 PM