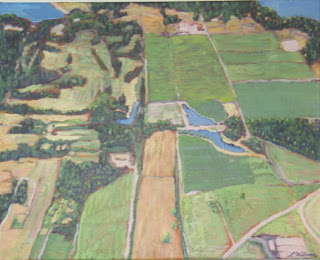 Richmond Art Gallery recently had its fundraiser "Mirror, Mirror II" which is a silent auction of member's works. The theme this year was "Little Landscapes and Miniature Worlds" - with no size limit. Interpretation was left to the artists. As I had traveled over to Victoria on a day trip on a float plane, I had some interesting photo references looking down on the Gulf Islands. To me, it looks like looking at a model railway set-up. You see the trees from a different angle. Rocks that form a beach are visible underwater for an extended distance. The whole landscape looks Lilliputian. So, that became my inspiration for "Aerial View, Gulf Island". And, happily, it was purchased. An artist friend has suggested I do a series - so that is something else to think about.
Posted by Loraine Wellman (lorainewellman@shaw.ca) at 8:26 PM No comments:

"Portraits of Local Artists" is over now, but I thought I would post my artist's statement from the show. (Guess who forgot to keep a copy before?)

I decided to paint portraits of Richmond artists when I was delivering flyers about Artists Among Us. One person said, "Who is an artists around *here*?" I thought then of all the really good artists who often aren't recognized in their hometowns. For starters, we have a marine artist who is known worldwide, a sculptor who sells in New York and painters selling in Vancouver, back East and in the U.S.

To increase awareness of local talent, I decided to do portraits that would indicate the type of work of each artist. The style of the portraits would be simplified for three reasons. One- the show would have unity in spite of varied backgrounds. Two- I could work from a drawing from life and not take too much time from artists who would rather be working on their own works. Three- the style conveys a "Time magazine famous persons profile" and creates a moment in the spotlight effect.

I wanted each painting to be like a billboard for the artists and the cumulative effect to show the wide variety of talent right here in Richmond. Of course, this is really just the tip of the iceberg as 20 artists are only a fraction of the total number of artists in the community. I'd like people to think about buying real art and supporting living artists. For a modest price, people can have one-of-a-kind art instead of mass-produced reproductions. They can choose a piece with personal appeal. No one can promise escalating values in the future, but if a person loves the artwork now, then in ten years they will still love it and have had ten years of enjoyment.

There is often the tendency to feel "real" art must be imported but we need to realize the value of local artists. in 1893, John H. Twachtman spoke to a class graduating from an American art academy and said, "Some day some of you will become painters, a few of you will do distinguished work, and then the American public will turn you down for second and third rate French painters." I would hope that in 2007, people would think for themselves and discover the talents of Richmond artists.