Being part of a "scenius" 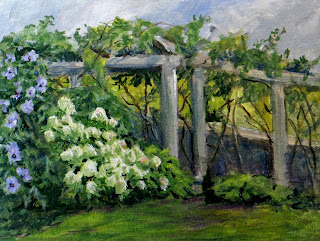 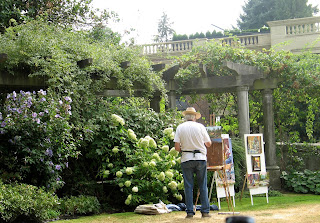 In "Show Your Work", Austin Kleon says that one of the most destructive myths about creativity is that only the lone genius is going to be able to achieve good  creative work. He then states, "There's  a healthier way of thinking about creativity that the musician Brian Eno refers to as "scenius". Under this model, great ideas are often birthed by a group of creative individuals- artists, curators, thinkers, theorists, and other tastemakers- who make up an "ecology of talent". If you look back closely at history, many of the people who we think of as lone geniuses were actually part of "a whole scene of pople who were supporting each other, looking at each other's work, copying from each other, stealing ideas and contributing ideas." Scenius doesn't take away from the achievements of those great individuals; it just acknowledges that good work isn't created in a vacuum, and that creativity is always, in some sense, a collaboration, the result of a mind connected to other minds."
With "Men in Hats", we have a scenius. During the summer, we are painting outdoors and then, in the winter, meet in a studio to  do more painting. Definitely, there is a scenius effect as we encourage each other. The above painting was done this past Wednesday at Hycroft where we have an exhibition. As part of our contract, we were invited to paint on the lawn so that members attending the BBQ could stroll around for a look during the social hour. We set up around 2 pm and left when the actual BBQ started at 6. The painting was my effort. You see the full scene in the photo below it with another of the group, David McHolm, painting and also showing other work. You will note that I eliminated the building across the street as I felt it didn't contribute anything to the painting. The challenge was getting the hydrangeas to look like hydrangeas and not random blobs! I feel that being part of this group has helped me on my "absorbing errand". In fact, in "An Absorbing Errand" by Janna Malamud Smith, that I mentioned a couple of blogs ago, she states "We need to work alone; we need to have privacy- sometimes a lot of it-.... but we also need to be stirred up, stimulated and challenged by others, especially others who share our interests and with whom we feel some modicum of mutual respect."
UWC club members who viewed us painting commented that it was interesting to see everyone doing something different. This is part of the fun of the group - we each take a different view and a different approach when we are out painting. Sometimes what we do succeeds - and sometimes we kick ourselves for not choosing a different spot or different angle - and sometimes we are in total awe at what another painter produced - but it all adds up to keeping the creative juices flowing as we take our own paths - but with the support of others.
Posted by Loraine Wellman (lorainewellman@shaw.ca) at 9:05 PM No comments:

Email ThisBlogThis!Share to TwitterShare to FacebookShare to Pinterest
Labels: "An Absorbing Errand", "Show Your Work", Austin Kleon, being in a group, being part of a "scenius", David McHolm, group support, Hycroft, Janna Malamud Smith, Men in Hats, painting with a group

I picked this more "domestic"painting  to show here as I've been thinking about time allotment, the demands of housekeeping and so on. I was reading about Louise Bourgeois and thinking that she was definitely an artist to admire. She worked at her art her whole life, even when she went through a period of very little recognition and carried on working right up to the day she died - in her nineties. Her home in New York has been preserved as she left it. It is obvious that art was her priority. I'm sure she would never give a thought to how to keep a stainless steel sink shining  and she obviously was not concerned about de-cluttering. Maybe modern women artists try to do too much in too many directions and live up to others standards. We need to keep telling ourselves that Martha Stewart has a whole staff! Instead of making a charming centrepiece of recycled and re-coloured glass jars as per Martha, Louise make a high stack of gift boxes of cookies, topped it with a gift of liquor and let that just stand in her living room.  When her husband died, she got rid of the stove and just cooked on a two-burner hotplate. Presumably, that was to simplify things as well as free up more space when she wanted to work in the kitchen. Maybe we all should think about Louise and what she accomplished- her "Mother" giant spider statue has been replicated in several places around the globe, for one thing- and try to tip the balance in favour of art over housework.
Posted by Loraine Wellman (lorainewellman@shaw.ca) at 5:24 PM No comments: 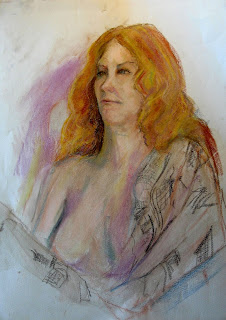 ---out again to Life Drawing the other night- I didn't do this one then but I thought I'd post it since I haven't photographed the latest one yet. I especially like the way I've captured the nose on this model ---and I liked the lighting. Lighting can be a bit difficult when there is one main light on the model - but you might not be sitting in the best position when there is a roomful of other artists. Still, there is the continual challenge of trying to do good work. I'm currently re-reading "An Absorbing Errand -How Artists and Craftsmen Make Their Way to Mastery" by Janna Malamud Smith. She makes a number of good points  about getting started, sticking with it and overcoming obstacles - so I may very well comment on a few points in further blogs. In explaining what an absorbing errand is,  she states " An absorbing errand is the agreement to undertake and sustain a compelling practice of your own, an effort at mastery that requires time and focus. It is an adventure with many perils. Yet, in return, you gain a window seat, forward motion, and a landscape made new."  I also love a quote from Lee Hammond "If it was easy, everyone would be doing it. That's why they call it artWORK."   I guess what a lot of us hope is that some of our "work" will last and give pleasure after we are no longer here. William James said "The greatest use of life is to spend it for something that will outlast it". - Certainly true in his case, but even if that level of achievement and recognition is not reached, the journey- the absorbing errand- can still be worth pursuing.
Posted by Loraine Wellman (lorainewellman@shaw.ca) at 9:52 PM No comments: