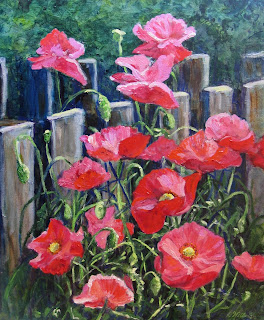 My Christmas cards have arrived from Apple so now they have to be sent out. Some friends "voted" their choice and I'm going with "Poppies by the Fence" even though they are not exactly seasonal flowers. ... The Globe and Mail printed their choice of the 100 best books of 2011 and Eric Larsen's "In the Garden of Beasts" made the list. I didn't mention it in my last listing... not one artist in it...but it was an excellent slice of history as it is the true story of the American ambassador to Berlin just before WWII. His family's gradual awakening of what was really happening - and the deafness of Washington to what he had to tell them- gives a real sense of what life must have been like then. On the "art" list, I read the biography of Modigliani - and wrote a review on it for Amazon. I also found Constable Portraits by Martin Gayford and Anne Lyles very interesting as I had just never thought of Constable in terms of portrait painting. He was admired by Lucien Freud - which is high praise indeed. Freud said "I've always thought that it was completely loopy for people to go on about portrait painters, English portrait painters, and not to have Constable among them." Further, he added "There isn't a good painter of 'subjects' of one subject rather than any other. I mean, as a game you can say, perhaps, Gwen John was the best painter of cats (as she is) but with really good painters all their work is really good. You can't say 'this is a marvellous painter but don't look at the portraits' "
Posted by Loraine Wellman (lorainewellman@shaw.ca) at 2:11 PM No comments:

Email ThisBlogThis!Share to TwitterShare to FacebookShare to Pinterest
Labels: Constable, In the Garden of Beasts, Lucien Freud, Modigliani

The Marsh in Winter 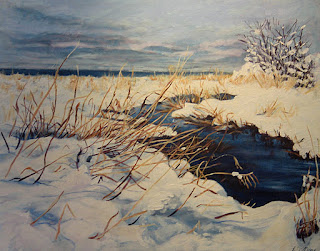 Last Thursday we changed the paintings on display in a local politician's constituency office. This is about the third time we have done it and it went very quickly. there are 12 paintings on display. Since the MLA holds receptions, they do get to be seen. So far, no really major results from it, but it does put the club name out here and paintings are seen, rather than being stored in closets. It is a good thing to take advantage of a display opportunity such as this. We show local scenes each time. My painting for this occasion was a winter painting from a nearby walk along the raised dyke by the marsh. I did a series of these a couple of years ago. This one is called "The Marsh in Winter" and is 24" x 30".
Posted by Loraine Wellman (lorainewellman@shaw.ca) at 7:22 PM No comments:

It's that time of year when the new book lists are with us and it is time to anticipate reading by the fireplace. I was looking over a number of books I've read over the past year and decided it was an especially good year for art books and books whose story line involved art in some way. Which is not to say that I didn't enjoy Ken Follett's Fall of Giants (and I'm looking forward to the story continuing in the next volume.) I'll probably read Catherine the Great this next year- but art did come into a lot of my favourites of last year. Barbara Kingslover's Lacuna would certainly be near the top of the list- if not at the top. Freda Kahlo is in there as part of the story but there is a lot of depth to the book beyond that. I liked The Forest Lover by Susan Vreeland - but not as much as some of her other books and I felt the touch of romance would not have been true to the type of person Emily Carr was. A number of readers were not as enthusiastic about her Clara and Mr.Tiffany but I thought it was good in how it showed the era and the setting and felt any detail about stained glass making *was* essential to the story. The Painter from Shanghai by Jennifer Cody Epstein was an excellent read about a real-life artist who was the first western-style artist from China. Well written and well-researched. Lots of incidental history in there too. More history in Madonnas of Leningrad (Debra Dean)as well as capturing some of the dementia of the aging lead character. Steve Martin, who is a very knowledgeable art collector, did a great job on capturing the crazy art action of modern day New York in An Object of Beauty. The Ghost Brush (Katherine Govver) was about the daughter of Hokusai - another excellent read. The painter in Elizabeth Kostova's The Swan Thieves was imaginary but set in the real world of impressionistic painters - and a good story too. I hope I find some more good books this year! The painting was done a couple of years ago in Gail's attic and the model got hooked on The Other Boleyn Girl while posing for us.
Posted by Loraine Wellman (lorainewellman@shaw.ca) at 8:58 PM No comments:

Email ThisBlogThis!Share to TwitterShare to FacebookShare to Pinterest
Labels: "The Forest Lover" " Clara and Mr. Tiffany, An Object of Beauty, Lacuna, The Ghost Brush, The Painter from Shanghai, The Swan Thieves 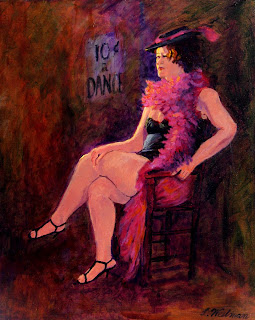 I just posted this painting for my November Newsletter but the format cut off her feet- so here is the full painting. It was done after Helene posed for us, at Adrienne's, in a costume that included a vintage hat that had belonged to her aunt. We set up the lights so there was rather dramatic edge-lighting. At the time, I did a drawing in coloured conte' and took photos. Then I painted this. There was something about the hat and the pose that made me think of the Depression era and the position of women then. They had a determination to somehow survive and make things right for their families... so I hoped to convey that determination in the painting. Since then, I've also made a 5"x5" ink and colour drawing that is now part of the International Mail Art Exhibition opening on November 17th in Richmond Art Gallery.
Posted by Loraine Wellman (lorainewellman@shaw.ca) at 1:49 PM No comments: