Rocanini show and pencils and war...

"The Old Camera" is one of my paintings on show at Rocanini Coffee Shop in Steveston. It was painted from a model who is wearing my yellow leather gloves. I thought about calling it "The Yellow Gloves". The gloves were bought in Paris over 50 years ago. Nowadays they mostly stay in a drawer but back then, gloves were worn more frequently. They are beautifully made with an interesting cut-out and braided join at the wrist.
The show will be on until June 1st and has paintings by Bonita Ruttkay, Margreth Fry, Penny Talbot and me. My "White Bouquet" is there too. If you are in Steveston, drop in to have a look.
With gloves from Paris, it might be a suitable time to continue with more pencil history. Conte' is a name familiar to artists as we often draw with conte' crayons - a form of harder pastel - but there is a real person behind the name. Nicolas-Jacques Conte' was an officer in Napoleon's army. Britain's naval blockade prevented the import of pencils from Cumberland. In 1795, Conte' invented a combination of clay and graphite for a cost-effective pencil. They could be made in degrees of hardness- something we accept as a "given" now, but it wasn't always so. So, a consequence of the Napoleonic Wars was that France manufactured its own pencils. Then conte' sticks were developed with using iron oxide, carbon black and titanium dioxide, clay and a binder to produce sticks in black, white, grey, and shades of red-brown.  These mix better on paper than any other hard pastels and have become a staple for many artists. The square profile makes for a more drawing style where soft pastels yield bolder strokes for a more painterly style. Georges Seurat used conte' to produce many of his studies. It is easy to find black, white, grey and shades of sanguine in most art stores but Conte' also used to make a full range of  colours. I have some I am guarding carefully as I haven't seen any in years. I remember seeing a whole stand of a hundred or more different colours in Conte' in an art store in Europe.  How I wish I had *that* in my studio!
Posted by Loraine Wellman (lorainewellman@shaw.ca) at 3:08 PM No comments: 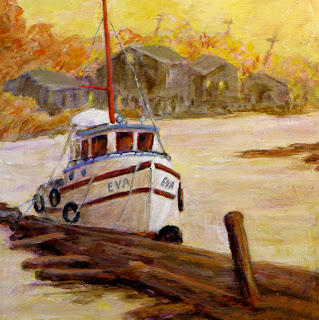 I was persuaded to do a painting for the Finn Slough show although I was feeling I had nothing more to contribute - so then I got inspiration to do the "Eva" in another view because "Eva" will be the subject of the Friday night talk - so here she is!  Eva has an interesting  history and has been donated to the Finn Slough Society. Usually moored in the Slough, she also appears at events such as the Maritime Festival. Naturally, I included her in my triptych for the hospital. I also did a bit of Finn Slough too  on the triptych but I took artistic liberty and turned the houses the other way around so they could be seen. As an artist, you can even move trees!  I thought it would be different to use autumn tones in this painting. This is a small painting - only 10 inches square  (easy to find room for)   It is acrylic on "gallery" canvas - which means it has deeper edges.  It doesn't need framing and looks a bit sculptural with the deep edges. I have a collection of 10 by 10's by friends that make a grouping by sitting on thin ledges --- just the width of the canvas edges so too narrow to call a shelf. It makes a nice grouping and will get added to. 10 by 10 is the size we use for our GuessWho? show and sale. (Next GuessWho? November 5th!) The Finn Slough show opens tomorrow- Thursday and runs to Sunday afternoon with the talk and the reception being on Friday night - in the Performance Hall in the Cultural Centre.
Posted by Loraine Wellman (lorainewellman@shaw.ca) at 2:32 PM No comments:

"Once Upon a Reflection" 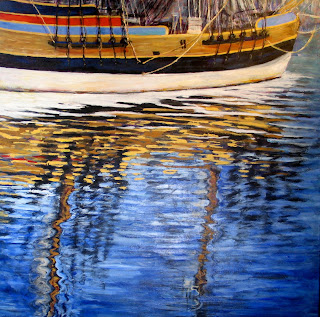 Here is the full view of the painting I just sent out on my April Newsletter. It is 36"x36" and is currently hanging with 14 other paintings by 14 other members of Richmond Artists Guild in the upper lobby of Gateway Theatre. They can be seen- until June 1st - during office hours as well as before and after performances.  I called this "Once Upon a Reflection" because this is the boat used in "Once Upon a Time"- the TV series shot in Steveston.  I like reflections anyway - and this was both interesting and bright. The sunny day and reflected blue sky helped as the Fraser River is not blue, in itself.
Posted by Loraine Wellman (lorainewellman@shaw.ca) at 8:19 PM No comments:

Email ThisBlogThis!Share to TwitterShare to FacebookShare to Pinterest
Labels: Gateway Theatre show, Once Upon A Reflection, Once Upon a Time TV series, painted reflections
Newer Posts Older Posts Home
Subscribe to: Posts (Atom)