What I did last night 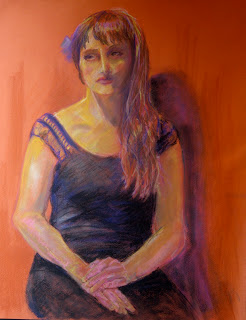 Last night, some of us were drawing or painting in the lobby of the Art Centre-to show the kind of thing that we do in our Life Drawing sessions.  For this public event, however, we did have a draped model...which is something we actually do sometimes in our regular Life Drawing sessions. We arranged a better lighted spot for the model, but our lighting was terrible. I thought I was using black for the dress strap - but, look- it is purple!  Also, not sure about the skin as it ended up more yellow, when I could actually see the colours I'd been using. I may go over it again to "de-yellow" it.   I was using conte' crayon on an orange paper.  This was done in around 2 and a half hours, minus breaks for the model. This event was for Cultural Days which runs all weekend across Canada. The Art Centre was really hopping and we had some people come specifically to join us to do their own drawing- which was really nice!
Posted by Loraine Wellman (lorainewellman@shaw.ca) at 4:09 PM No comments: 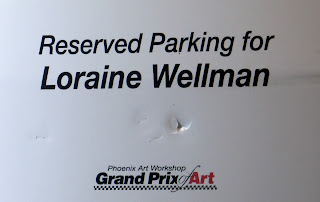 Last weekend's Grand Prix of Art was a great success with over 65 artists in the "race"- three hours to complete a painting once you get your luck-of-the-draw location.  We had good weather - although a little flat lighting- and lots of volunteers helping things run smoothly.  I'm not into marathon walking yet, since the hip replacement, so when I asked about parking, Mike Rossiter said he'd make me a sign. Sure enough, there it was at the parking lot- so I felt very privileged!  I ended up drawing a spot right at Britannia. Jenny Taylor, who had broken a bone in her foot, was in the same spot so we joked that only people with walking aids were allowed there.  We had fun as some things in our view were taken down and more pennants were added. It felt good to be out painting again - and then we had a great lunch provided by Bean And Beyond.
Posted by Loraine Wellman (lorainewellman@shaw.ca) at 10:41 PM No comments: 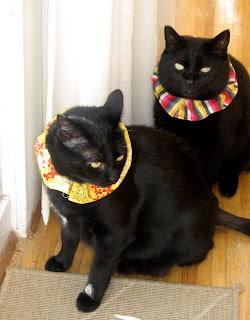 The studio cats are looking especially spiffy these days and are happy in their new ruff collars. Digby had proved himself to be a successful birder - causing owner-stress!  Isabella, in the meantime, was missing the distinction of her plastic collar from the vets. Yes, she actually *liked* that collar.  She had had to wear it to keep her from bothering the stitches in her tail from an encounter with a raccoon. So, one thing led to another - and on to a Google search- and Birdsbesafe was found. So we sent off to Vermont for collar and ruffs to protect the songbirds. Made of washable  eco-friendly cotton, they come in colours that songbirds can see. Both cats are happy and comfortable and I also feel it is helping Digby be calmer as he does not have the excitement of bird-catching. Isabella shows her Italian background by preening in her new fashion accessory. Each has a spare "just in case" so they will be all set to show off at the next Open Studio - or drop by to have a look anytime.
Posted by Loraine Wellman (lorainewellman@shaw.ca) at 2:41 PM No comments: 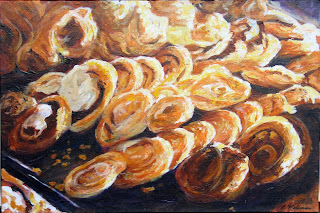 September may seem like it is getting closer to the end of the year- but if you have ever been a teacher, or if your school year memories linger, then it always seems like a beginning. So I've been thinking about what set me off on my course to be an artist.

What triggers the desire to be an artist?  I knew I wanted to be an artist from the time I was small enough to walk under the counter-height entry gate to the secretary's office in the old Vancouver Art Gallery. Mary, the secretary, was a friend of the family and visiting her at VAG was an expedition to a magical world of enormous gilt-framed paintings, shining floors that seemed to go on for miles and an exciting bronze-figured fountain. VAG was then a small institution with a basic staff of three- the Curator, Mary, and Tommy the caretaker.  Tommy disliked small children who slid on the polished floors and marked them but I didn't slide and my blonde curls helped win approval and I even was allowed close to the exciting  fountain.

After some experiences with plasticine in Grade One, there was little art instruction in elementary school. Nothing as messy as paint ever entered the classrooms. We made many paper boxes with designs cut out of squared construction paper while pencil crayons were an accepted medium. The illicit eating of library paste was as wild as it got. Somehow, I still became the "class artist".

Because of Mary, my Mom knew about free Saturday Morning Art Classes at VAG. My school hadn't been aware of the classes but a note from Mom resulted in the required recommendation. My Saturdays turned into special days. VAG was closed Saturday mornings and classes were held in the galleries, right under the paintings. We lay on canvas on the floor with drawing boards while another strip of canvas kept our feet from scuffing the walls. Local artists taught the classes which began with a talk to inspire a theme and ended with a critique. I've never looked at "Rain" the same since it was one Saturday's theme. The artists tended to be "hands on" but a dapper art-critic teacher would remain standing and carefully point his polished shoe at the finished painting he was discussing. I don't think we ever took any work home. Sometimes student's work was displayed. My "Storm at Sea" was shown in a department store window- my first public success! Another painting of a peaceful world went to a UNICEF display. By rotation, we had the opportunity to work in a basement studio with a well-known sculptor. I remember doing a frieze of a forest fire. Sometimes we talked about the paintings on the walls. There were several by Emily Carr, even then BC's most famous woman artist. Paintings by the Group of Seven hung as well as many very traditional works. It was an exposure I would not have had otherwise.

After three years, most students were beyond the age limit, but a smaller number of us were invited back as Class 4A. We formed a tight group although we were from all over the city and never saw each other except for Saturdays. Our instructor was a well-known artist who taught us to look around with artist's eyes. At that year-end party, I received a scholarship to Saturday art classes at Vancouver School of Art. I also started Junior High School- with a real art teacher in a real art room where even "messy" paint was allowed. My art education took a leap forward - but it had all started with stepping under that counter in the old Vancouver Art Gallery.

Further note- Alas, my blonde curls turned to straighter brunette. Interestingly, the bronze fountain was removed after a wealthy patron tumbled into it as he stepped backward from painting inspection. Vancouver Art Gallery is now in a different building and Saturday Morning Classes have been replaced with Family Sundays.

The painting is "Danish Danish". I painted until I felt like I could nibble.
Posted by Loraine Wellman (lorainewellman@shaw.ca) at 9:27 PM No comments: