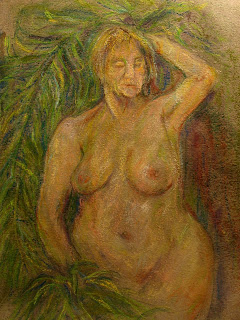 Now that we can get the painting room in the daytime (which we can't in the summer, due to  kid's classes), we are back having long poses again. Most people are painting although some are drawing, and I am back to mixed media. I had a rough grey paper for this ... now I can't remember the name of the paper but it is quite rough and has flecks of something that looks like bits of straw in it. I started with a drawing in black conte' and then used pthalo blue, alizarin crimson and arylide yellow  acrylic in some washes. After using the blow-dryer, I painted on acrylic gel for pastels and then dried that too. Since the paper was already quite rough-surfaced, I then had a nice gritty surface to work on. Giving created the pose from inspiration from a statue who was part person but also turning into a fern and returning to the earth. The statue's hands had already melded into fern fronds. So it was fun to have this different idea. I worked a bit of green into the skin tones. I used some powdered pastel, applied with a sponge to get a base going as both soft pastels and harder pastels tended to sit more on the surface of the rough paper. However, I also liked the effect of the upper layers of pastel on the rougher surface. I think I only have one more piece of this paper but I may do a search to find some more. I recall that it did  come in different colours. So, what should I call it? Lady of the Ferns?
Posted by Loraine Wellman (lorainewellman@shaw.ca) at 8:08 PM No comments:

Email ThisBlogThis!Share to TwitterShare to FacebookShare to Pinterest
Labels: Lady of the Ferns, mixed media life drawing, pastels on a very rough surface

This shows the set-up we had for GuessWho? on November 4th at the Pioneer  Church at #3 and Steveston Highway.
We set up grids and hang all the 10x10's on both sides of the grids. We had 137 paintings and sold 52 - all from 10 am to 3pm. There was a terrific selection and we made $2350 for the  Richmond Food Bank. We also had a lot of fun so it was a great success. If you didn't make it this year, mark your calendar for next year when it will be November 3rd. You'll never had a better chance of getting terrific original art for only $100!! 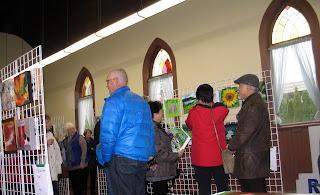 Posted by Loraine Wellman (lorainewellman@shaw.ca) at 10:11 PM No comments: 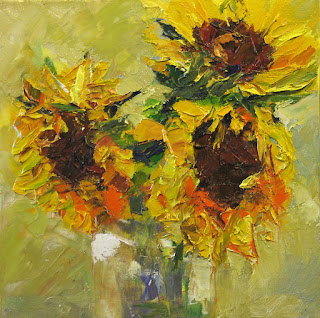 Something different today- I didn't paint this and I'm not telling who did - but this lovely 10x10 painting could be yours for only $100 at this year's GuessWho? sale... and then you will find out who the artist is. The sale is this Saturday, November 4th from 10 to 3 at the Pioneer Church at the corner of #3 and Steveston Highway-- the little church on the grounds of South Arm United. $50 goes to the artist -- so you see the artists are making a contribution too -of time,materials and talent. Then the balance goes to Richmond Food Bank - which is a very good cause especially with the colder months coming up. There are 132 paintings to choose from this year. They include paintings by artists whose works sell into the thousands - and also works by students of Steveston/London Secondary and some of these may be worth fortunes too when the student artists become famous!  Since they are all the same size and don't need framing, you can start to build up a collection. I have some sitting on  strips of wood painted the same colour as the wall. That way it is easy to get them at the same level without bothering with wall hangers. A gallery wall is a lovely way to enjoy a variety of paintings. Often I deliberately do something a bit different - so my challenge to you is to guess which ones I painted this year.

Posted by Loraine Wellman (lorainewellman@shaw.ca) at 2:13 PM No comments: