Walter Foster -mentor from my past 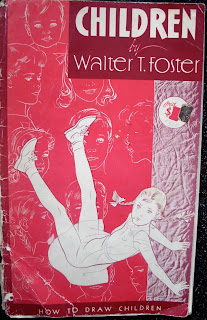 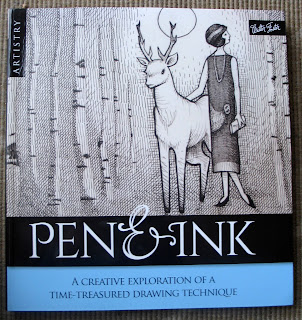 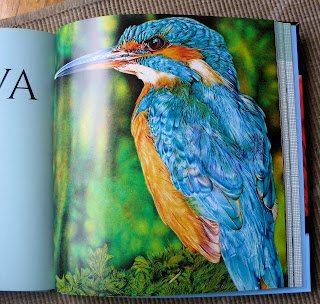 I recently received a new publication from Walter Foster publications. Pen&Ink is the first in a planned  Artistry series which will focus on various fine art mediums.  The name Walter Foster is very familiar to me as I still have my very first art book on how to draw children top, above. A friend of the family gave this to me when I was also a child in order to help my drawing of people. It is well-worn and certainly helped back then. Now Walter Foster Publications is producing a new series of books that should be of great help to artists.  This first book focuses on pen and ink  and, after a basic introduction to tools, materials and techniques features four different artists with different techniques and styles. Desarae Lee also uses water colour washes and collage material. M.Ramos is a Brazilian artist who uses stippling (along with a magnifying glass!) to create detail  such as cats' fur and the smoke and steam of a locomotive. Loui Jover is from Australia and works in mixed media. He uses vintage book pages as  his drawing surface and creates very interesting effects. I especially liked his city scene as the book pages added another dimension to the work. I was amazed by the work of Samuel Silva who is now based in London and works in ballpoint pens.  Yes, ordinary ball-point pens to produce startlingly realistic work such as the bird shown above!  Needless to say, this is very time-consuming but the book does show it all in detail. Illustrations are excellent and inspiring. It seems like Walter Foster -or his descendants - is carrying on as an aid to artists.
Posted by Loraine Wellman (lorainewellman@shaw.ca) at 3:30 PM No comments: 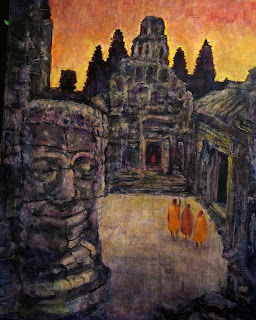 No, this is not the 11 million dollar painting - but one I recently "fixed". I was one of my dream cities series - cities you imagine visiting - until you get there and it is too hot, too cold, too crowded, too polluted - or your feet hurt! I imagined Angkor Wat as a place of serenity but, as the original painting stood, it didn't quite come off .  Some others in the series had that magical feeling but I was going to just paint over this until after a lecture on colour and simultaneous contrast  I went over the painting with glazes to recreate some of the mood I had been striving for. This is part of the struggle of painting- getting the mood right . All of us in our group are serious in our struggles. Not that we don't have fun- but it is serious work.
But uplifting news was found in the fact that Lawren Harris' "Mountain Forms" painting sold for 11 million at a recent auction and set a record for a new high for Canadian painting. This is good news as it shows Canadian art can hold its own on the world art scene and that paintings are still highly valued.
However, our local public gallery has decided , without any public input, that they are a "contemporary" art gallery with an "educational" outlook.  Paintings, apparently, are things that can be shown in a commercial gallery but not within their walls. I would think that about 75% of the local population would like to see paintings - at least some of the time. Most people do not have the space or set-up to allow for installations and video presentations but would be happy to have a painting they enjoy on a wall. Contemporary architecture and interior designs show paintings used to complete the setting. Ignoring painting seems a bit elitist to me. It also ignores centuries of art history.  I would bet that 300 years from now, people will still travel to Paris to see Monet's waterlilies and Amsterdam to see the "Night Watch" but I doubt they will go to London because of Tracy Eminem's unmade bed. In fact that bed may well have been thrown out by then. I must admit that I laughed when I read about an installation that got swept up as debris by new cleaning staff!  Many of the "stars" of today's art world - even Lawren Harris, the Group of Seven, and Emily Carr - got much of their early recognition from  open shows in public galleries. Local public galleries need to support local artists by at least occasionally giving exhibition opportunities. A few years ago, before the change in "mandate", I had the opportunity to show "Local Landscapes" and it was well-received. I think that part of an educational program should include showing what is produced in painting today- of all genres and mediums, not just what is deemed "contemporary". Contemporary should mean current and not indicate a particular style.
Posted by Loraine Wellman (lorainewellman@shaw.ca) at 6:46 PM No comments:

Email ThisBlogThis!Share to TwitterShare to FacebookShare to Pinterest
Labels: "fixing" a painting with glazes, $11 million dollar painting, educational gallery programming, painting is not dead, value of painting, what is "contemporary"? 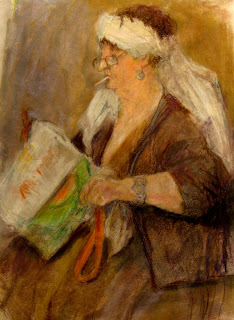 Here's one that is unlikely to sell - but it was fun to do. Last Friday we had a "long pose" session and had Ginny dress up as a bag lady. In fact, I think I'll call my piece "It's in the Bag"! I was working again with mixed media. On watercolour paper, I drew in black conte' crayon and then did a wash - using red, yellow and blue - Pyrole Red, Hansa Yellow and Ultramarine Blue, to be precise. Then I used a blow-dryer to dry it (we keep one in out cupboard at the art centre)  and then I  put acrylic gel for pastels over it. This is a gritty gel that dries to a surface that will hold the pastels. Then, after another session with the blow-dryer,  I worked in pastels to finish it. I think Ginny was a bit amused by the various results of her pose. We've told her that next time we should have her come as a society lady for an opposite effect. At any rate, it made for a fun session.
Posted by Loraine Wellman (lorainewellman@shaw.ca) at 7:27 PM No comments: 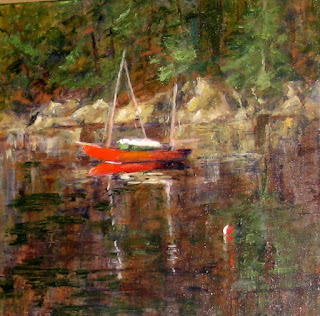 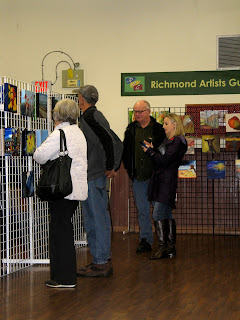 Above is my 10x10 that sold at GuessWho? and also a photo of people figuring out what painting they wanted .
My sailboat was mostly painted with a small palette knife as there were smaller details on it but I didn't want it to get "bitty" with using a small brush - and I also wanted the paint to be reasonably thick. I think you can really see that it is along the coast because of the way the land slopes up. It is one of the coastal islands with the typical  rocky shore and growth of evergreens.It has gone to a good home.  It was interesting working on the reflections- very different with the darker colours than when I worked on reflections on a sunny day in Steveston for Once Upon a Reflection (on April 1st blog)  I also put in, for GuessWho?,  the one I did in the Ladner GrandPrix but I think it has much more limited appeal so it didn't sell. I think I will paint over it.
The sale did fairly well but not as well as last year - so there won't be quite as much money raised for the Food Bank, unfortunately.  I think people are unsettled and concerned over the US Elections., so we will have to see how the sale goes next year.

Posted by Loraine Wellman (lorainewellman@shaw.ca) at 5:16 PM No comments: 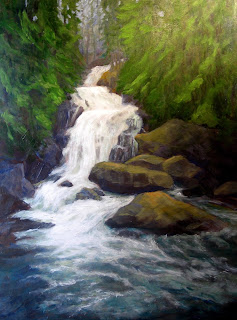 Here is the full image of my waterfall painting that I just put on my November newsletter. It is 40  by 30 and was an interesting challenge to paint in order to get the waterfall to really *flow* and capture the way light is up in the West Coast mountains. You have to work to get the rocks right so the flow is realistic. I started this one with quite big brushes to get the energy and action flowing. It was a lot of time and work but also fun - so now I'm painting another waterfall. The latest one is just a small roadside waterfall - a reminder that you don't necessarily have to go hiking to enjoy a touch of nature.
Nature and many other subjects will be found on 10x10 paintings at our annual one-day anonymous art sale GuessWho?. All the paintings are on gallery-thick canvas and all sell for $100 each. $50 goes to the artist and the balance goes to Richmond Food Bank. Many artists are members of Richmond Artist Guild but there are also well-known professional artists, members of Western Canada Taiwanese Artist Society and  high-school students --- hey! you might buy the next BigName artist!  GuessWho? is this Saturday, November 5th from 10 am to 3pm at the Pioneer Church at South Arm United. A brief viewing period first, then when the whistle blows, buyers can take their choice. It is a bit exciting at the beginning but there are over 150 paintings and a good selection even later on.It is a great way to start an art collection. I have a wall of 10x10s - my "friends wall"- of paintings by artist friends. I used narrow wood strips on the wall so the paintings rest evenly and can be moved around. Some are GuessWho? paintings and some have been purchased - or traded for- otherwise. My "wall" is now going to extend a bit around the corner. It is something I enjoy every time I walk into my computer room. At only a $100 you can have the enjoyment of original art and also support a good cause.

Posted by Loraine Wellman (lorainewellman@shaw.ca) at 7:05 PM No comments: