This is one I actually painted quickly - in less than one day. Maybe I got my speed up in the GrandPrix! I was also feeling pressure because the flowers are just not lasting very well these days. I have a large sunflower painting on the go - worked most of one day and evening on it before there was major drooping. Of course, I also took some pictures and I'll need them to finish.  The sunflowers have now gone on to make their contribution to the compost box. I think flowers have more life in a painting when they are painted from life.
Last blog I was writing about blue - and here I am with a painting that has almost no blue in it. The background is Paynes Grey and white with just a touch of French Ultramarine. This is not the historical Ultramarine but rather a modern replacement. In 1824, an industrial society in France offered a prize for any chemist who could discover how to manufacture an artificial Ultramarine. Four years later, the French colour maker J.-B Guimet developed the winning recipe. French Ultramarine quickly became a core colour for artists, who appreciated its cheapness. Today, it is still a basic blue. I often use it in shadow mixes because it is transparent. Prussian Blue is one of my favourites for water- especially for reflections.It was the first colour to be made artificially and was produced accidentally in 1704 by a paint maker in Berlin. Cobalt Blue was created in 1802 by a French chemist called Thenard. Made from cobalt aluminate, it took over from Smalt. It works nicely in acrylic for our  local summer skies.  Cerulean Blue was also developed in 1802 by a German scientist Hopfner by heating cobalt and tin oxides. This is a great colour for watercolour skies but not transparent in acrylics. Phthalo Blue was synthesized from copper phthalocyanine in the early 1930's. It is a deep intense blue and is often used instead of Prussian Blue. I think you have to be a bit careful with it to keep it from looking too strong and artificial. Indanthrene Blue is similar to Indigo and is available from some manufacturers and another substitute for Prussian. One interesting thing is that hues can vary from one manufacturer to another and from one medium to another. Artists tend to develop favourites and it is one of the reasons an artist's work develops a recognizable "look". It is interesting to think of the history behind the colours we squeeze out on our palettes.
Posted by Loraine Wellman (lorainewellman@shaw.ca) at 9:36 PM No comments: 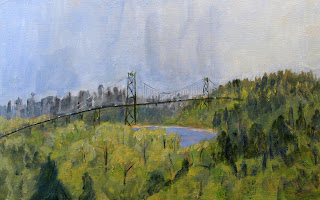 There is a new blue in the world. It was accidentally discovered by Oregon State University researchers who were testing compounds for uses in electronics. The pigment ha been named YInMn Blue after its three elements - Yttrium, Indium and Manganese. The mixture was brown but turned to a brilliant blue in the heat of a furnace - an entirely new pigment.  Because of the rare elements, it will sell around $1000 per kilogram - so, although it can be mixed into paints and plastics, it is doubtful that it will be lavished on canvases in paintings. It has some other interesting  aspects - it absorbs UV light and resists high temperatures so it could be used for cooling roofs.
This is not the first pricey blue. Artists of the Renaissance's Ultramarine (which means " from beyond the sea") came from a gemstone called lapis lazuli which was more expensive than gold. Ancient Egyptians had a blue that was made from azurite, a copper carbonate mineral. This was still used by 15th century Renaissance artists , sometimes as an underpainting for the more costly Ultramarine. Artists' contracts often specified that Ultramarine  was not to be substituted by the cheaper azurite as it was to denote the patron's status and wealth.
Woad was used in northern Europe ever since the ancient Britons used it to dye their faces blue to strike fear into Julius Caesar's invading army.  Artist monks used woad to illuminate the Book of Kells in the eight century. Then Indigo was imported from India and it was 30 times stronger than woad. It became available to painters who sometimes used it to underpaint azurite to give it more depth and warm its effect.
Smalt was a deep blue colour produced from cobalt oxide that replaced azurite. It was used widely from the sixteenth to the eighteenth century . J.M.W. Turner (1775-1850) was said to use great quantities of "smalts of various intensities".
Artists nowadays are fortunate to have a choice of blues available- as I did in the above plein air painting "From the Balcony" .
There will be more on blues - my main reference for this is Simon Jenning's "Artists Color Manual" from Chronicle Books.

Posted by Loraine Wellman (lorainewellman@shaw.ca) at 10:49 PM No comments: 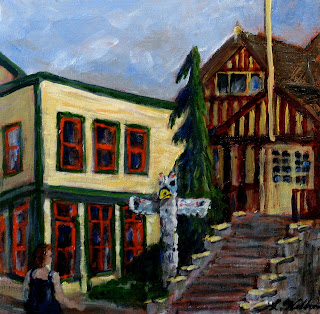 Here is the 10 x10 (inches- and, no, I have no idea why canvases here are still in inches) that I painted in slightly less than 3 hours during the GrandPrix Delta, held in Ladner. Just like in real estate - it is location, location, location, but this is the luck of the draw and I got looking across a road under reconstruction to the Museum. I understand it was the old municipal hall. The totem pole is an authentic one and it is currently rotting. According to First Nations, totem poles should be allowed to return to the earth. Ladner has to decide whether to leave the totem where it is and let it be , or move it elsewhere to let it rot.  I did cut down the height of the tree which would have gone far off the top, but there wasn't much I could do about the flagpole- leaving it out didn't seem quite right. The figure was invented - to bring the viewer's eye back into the painting. I am reasonably pleased with what I did. If I had my choice of any place, I would have picked a colourful store front or a boat down by the river. The latter, boat, reflections and all was what the first place prize winner got to paint - a beautiful painting but also a great location. However, it was fun and we had the owner of Hill's shoe store - two doors down- being very helpful. She even supplied a tray of cookies that could be offered to passers-by. I found a couple of chocolate chip cookies really helped with the painting- especially as it had been an early start to the day and paint time was from 10 am to 1pm - so a later lunch. If construction had not been going on, there were plans to have a couple of antique cars parked on the street. That, of course, would have made an entirely different painting possible. The challenge, of course, is to do what you can with what you get in a situation like this. Going out and picking your own spot is a whole other story.
Posted by Loraine Wellman (lorainewellman@shaw.ca) at 10:46 PM No comments: