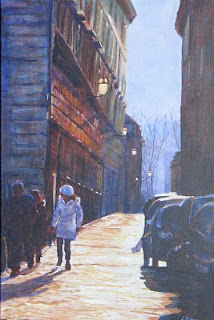 I've been noticing lately how one word often keeps cropping up repeatedly. Right now, for me, that word is "limpid". This is *not* a word that I am especially fond of. I somehow get a mental picture- if the word is used as "limpid blue eyes" - of someone with a vacant stare. Must be the "limp" part! I prefer to use "clear", "translucent" or even "pellucid". .. Anyway, this "limpid" keeps cropping up in a book I am reading about the Impressionists. The current one is a history - but, before that I read "The Swan Thieves", a novel by Elizabeth Kostova. The novel is about an imaginary woman painter during the time of the Impressionists but there are actual historical references too - such as the Prussians destroying hundreds of Pissaro's canvases. An interesting novel. I enjoy reading *real* art history and also historical fiction. I liked Susan Vreeland's "Luncheon of the Boating Party" - all about Renoir and the painting of his masterpiece. Some other glimpses of Impressionists were in a few of the stories in her "Life Studies" too. Thankfully, neither Kostova nor Vreeland were addicted to the use of "limpid". I'll post a painting that was in the recent show at the Federation Gallery - Roman winter- are the colours "limpid"? I think of it as clear winter light...
Posted by Loraine Wellman (lorainewellman@shaw.ca) at 2:53 PM No comments: 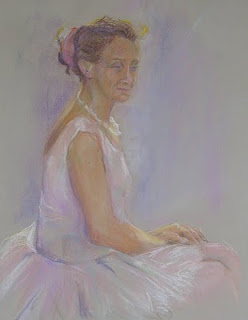 For the recent "DoorsOpen", I made a display on one wall that had drawings from one life-drawing session- Iva in her ballet outfit- and then I posted the following explanation. Life drawing is called "life drawing" because it is drawing from life - from a live model. The model is often "undraped" (nude) in order that the artists can better understand anatomy. Sometimes the model is "draped" (clothed)- which can actually be harder as besides needing an awareness of how the body is moving under the clothing, the artist has to draw the clothing itself, with all its folds and drapery. Each life drawing group has its own format as to how the poses are set up and the timing planned. One person is the timer and, usually, another sets the lighting. Some groups are silent but it is more usual to have music playing. Again, the music will vary with the group. In the group in which these drawings were done, the format is five one-minute poses, five two-minutes poses - for warm-up - then four five-minute poses which are actually the same pose but the model rotates 360 degrees. This rotation pose is excellent practice in anatomy and drawing from different angles - along with the problems of "foreshortening", the term used to describe perspective relating to the human form. Then, in this group, we do a "long pose" - half an hour, then a coffee break followed by a return to the same pose for a further hour. The last hour is in two half-hours to give the model a break between.
Posted by Loraine Wellman (lorainewellman@shaw.ca) at 10:31 AM No comments: