The Artist or the Art? - and thoughts on Egon Schiele 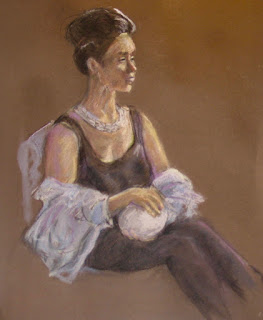 Here is a clothed model from a session of about 2 hours last Wednesday evening. Pastel on Canson brown pastel paper.... and so we come to the whole question of painting and drawing models.  We treat models in a professional, respectful way and they are paid for their work. Long poses, now are often draped (clothed) poses. This is to create a bit more of a "story" and also that the challenge of rendering realistically draped clothing takes a bit longer. Lately there has been a lot of press about the relationship of the artist to the art with the cancellation of a retrospective of the work of Chuck Close after he was accused of sexual impropriety, being just one such story.  On the other hand, there is a retrospective of Egon Schiele work on show in Boston and there is no doubt that his work is sexual and his lifestyle open to question. When I was in Cesky Krumlof in the Czech Republic some years ago, I visited an Egon Schiele museum. Some of the drawings were pretty well pornographic and there was information about his trial for exposing young people to pornography, for which he was sentenced to 28 days in prison. On the other hand, there was also some beautifully expressive line work and real talent. I don't like most of his self-portraits - especially the nude ones that show a self-hatred, but nevertheless show talent. Just my opinion.  But, I wouldn't want to see his work banned because of his personal life. There is some question about the many female nudes painted by male artists, displayed in many galleries.  One reason is that it was male artists who got  recognition most of the time. No doubt many of the artists were less than sterling characters but I think we should be looking at the art and not the artist's  lives. Otherwise, where do we draw the line? Maybe we just don't know all the details of the private lives of those who lived in the past. What we should be looking at is what is in front of us - and consider  how we react to it. Reactions can vary - I have a nude painting that I was proud of as I had set the pose and the lighting in the absence of the instructor, who got detained by traffic. I have it up in my bedroom and, while she was alive, my mother complained about it every time she came over! She found any nudity offensive. In our Life Drawing sessions, there are more women than men. Generally speaking, there are more female models and often both male and female artists prefer drawing females - the curves are nicer! Drawing nudes, for artists, is like playing scales for musicians- it keeps you tuned up. You can draw a tree and make a lot of mistakes and still have it recognized as a tree- but make mistakes in human proportions and the errors are obvious. I don't think drawing nudes will be banned as long as we live in a free society
Posted by Loraine Wellman (lorainewellman@shaw.ca) at 3:18 PM No comments: 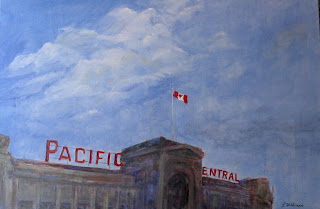 Here is a recent painting- not quite sure what to call it - maybe simply "Station"? ? I was thinking of a sort of "sky's the limit" outlook - whether for a new arrival or for someone going on a trip- and I liked the idea of simply looking up. With all the depressing political news and concerns for democracy- maybe something a bit inspirational is what we need. I've been doing a workshop concentrating on composition- the main "backbone" of a painting- that has been very inspirational and  calling into question how to approach various subjects. This one  "works" because one's eye is led around the painting and brought back to the central image. I'll be showing some other subjects shortly
-In a previous life, I had a large doll collection and also made dolls- so I still have some interest in that direction. When the first Barbie came out, I was intrigued as I felt that they were almost like the historical  "fashion dolls" that travelled to show the latest styles so seamstresses could copy them. I got a Barbie #3 - which was the first version available in Canada- and outfitted her in an American Airlines stewardess outfit. The original bathing suit and sunglasses went in her carry-on. Costumes then were much more intricate than later when clothes were made easier for little hands to cope with. So ,although my Barbie is long gone, I was interested in the series of famous women produced for International Women's Day. I thought the "recognition" was a good idea but have reservations over the Frida Kahlo doll. I now see that there is quite a controversy about it as she has definitely been "sanitized". Her costume is much simplified and not authentic. She stands straight and tall with no wheelchair or indication of the suffering she went through in her life - and there is no uni-brow which was a statement. She had a strong personality, painted some rather disturbing paintings and was a staunch Communist. So- what to think? Is it good to at least have little girls made aware of this famous artist? Or is it wrong to have this sanitized version? Would it have been a better, fairer, more thought-provoking image to have her seated in a wheelchair? The jury is out-- and I'm not collecting any more.
Posted by Loraine Wellman (lorainewellman@shaw.ca) at 3:32 PM No comments: