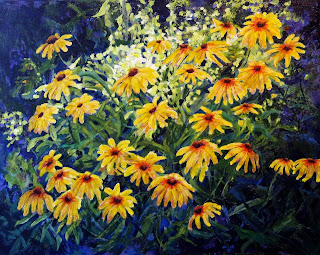 Today we hung the Men in Hats show for the summer at Hycroft. This is one of mine in the show. It is Rudbeckias II.   Tomorrow, Tuesday the 23rd, we have the reception from 6:30 to 9:00pm and. besides our very nice show, it will be a chance to tour this grand old mansion. Hycroft was built in 1911 by a retired military man - a General, I think- McRae. McRae made his fortune in concrete as a lot of building was going on in those early days in Vancouver.  The house is mainly of conrete and has great concrete pillars  to the house as well as the terrace. Stairways and fencing and arbour in the gardens are also concrete. The gardens were even larger in those pre-income tax days but the coach house and the gardens around the house remain. Some of the property on the east side was sold and then the house was given to become a nursing home for injured military after World War II. Then it wasn't needed for that any more and the University Women's Club of Vancouver decided it would be a wonderful clubhouse. However, women were not allowed to have mortgages in their own names so the club raised the money to pay cash for the property. (was it $35,000 or $45,000?). Since then, they have restored it- although all the wonderful old wood and fireplaces, tiled atrium and so on were pretty well intact- and it is now a grand old mansion that is a wonderful clubhouse and popular place to rent for a wedding. Our paintings hang in the upper hallway.  How nice that this piece of Vancouver's history remains.
Posted by Loraine Wellman (lorainewellman@shaw.ca) at 10:58 PM No comments: 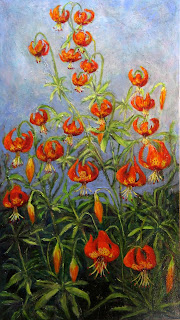 There is much to be said about creativity and the liberal arts these days. On the one hand, we are told that it is the liberal arts that boosts creativity - and ultimately productivity (if you want to think in only dollars and cents). On the other hand, high school students are told to go into STEM  courses (science, technology, engineering and mathematics) if they want to end up with a job as well as a university degree. Well, we have had Einstein telling us that imagination is important and many successful businessmen stating that it was the liberal arts that broadened their thinking and led to their success. Two things have crossed my path lately that add to what is  definitely my own bias in favour of liberal arts. Creativ.com is producing a magazine that is the most beautiful magazine I've seen. It features stunning photography, stimulating ideas and impressive art work. In the two issues I've seen, I was especially impressed with the cut paper work of Maude White, wonderful cartoon building-size murals by Millo in Turin, and paintings by Asa Kucherevskaya (Ukraine), Leonid Afremov (Mexico), and Jeremy Mann of California, USA. While Creativ does have a website, there is something special about holding this glossy magazine in your hands. Alas, the low Canadian dollar makes the magazine a bit pricey this side of the 49th. I've also been reading "A Teacher's Tale" by Joe Gilliland who had more than 50 years teaching at the college level- a career he basically stumbled upon by taking university classes (aided by the GI bill)  with no clear goal in mind. His love of reading and thinking about the ideas presented in books is given in much thought-provoking detail in the 600 pages of this memoir. He argues that Science isn't enough. "Science requires the imagination that questions the absolutist's certitudes and math is the tool with which the certitudes are tested." His round-about route to his life's work is inspiring. He states "Success in life is not determined by the wealth one accumulates in his or her search for a calling, for a life's work. Success relies on satisfaction in the pursuit of happiness and education is one of the keys to that feeling of success and that earned happiness." If you are a reader, you will really enjoy this book - and probably end up with an arm's length list of more books to read!  "Cherchez le Chat" - the above painting was planned as a creative approach to a presentation of my red lilies. They are impressively tall plants and I wanted to convey the "jungle in Richmond" feeling about them. This led to thinking about Henri Rousseau who created jungle paintings by going no further than a conservatory. Obviously, my painting needed an animal - and what better than a prowling black cat? The cat is better seen in real life than in a photograph, but I'm sure you can figure out where he is. Although Digby doesn't have a proper tail, the painted cat does.
Posted by Loraine Wellman (lorainewellman@shaw.ca) at 3:16 PM No comments: 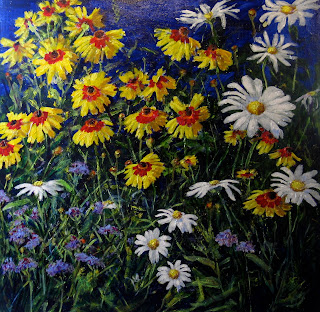 I just sent out my newsletter with this one- "Not Just Daisies" on it as I will be showing this on Saturday for DoorsOpen. It is a fun, bright floral based on flowers seen at a Community Garden here in Richmond. I'm busy organizing paintings - while discovering some escaped me and are not wired - so pause has to take place so they can be attended to. It is fun, of a sort, to pull out a lot of paintings and set them up so you see them in a new way. All this work requires a pause in actual painting production and today's rain has cancelled the pleinaire expedition, causing a pause in that too. Still, a slight pause can be a good thing as reflection certainly has a place in painting. It is working for me because I am about to embark on a new project, not ready for announcement yet. Ideas are in the brewing stages -writing down ideas, doing some very rough sketches, collecting references and so on. I'll start on some more sketches after DoorsOpen to work out compositions and then move forward on something that will be a bit different. Stay tuned for updates!

Posted by Loraine Wellman (lorainewellman@shaw.ca) at 9:33 AM No comments:

Email ThisBlogThis!Share to TwitterShare to FacebookShare to Pinterest
Labels: "Not Just Daisies", getting started on a new project, pause for reflection in painting
Newer Posts Older Posts Home
Subscribe to: Posts (Atom)