Home for a Garden

In 2000, the Gulf of Georgia Cannery National Historic Site had a juried show "Workforces" with the focus to be on cannery workers,fishermen and their contributions. I wanted to come at the theme from a different angle and thought about present-day contributions of the descendants of the workers. Then I thought of Mrs. Sakata's garden - a Steveston treasure. Everyone passing by gets so much pleasure from viewing this garden. Kay Sakata is both daughter and wife of fishermen and has an extended family that has made many contributions to Richmond. Her daughter is a local school principal. Then I decided to do the painting as a triptych so that the size would make it a little like walking into the garden. I worked from my own photographs, edited out the stores across the street and proceeded to rough in the painting. I don't have an easel set-up that would work for a six-foot width of paintings so I worked on each section alternately, taking time to line them up against a wall to make sure the lines and colours matched. At the show opening, Kay Sakata was pleased to see her garden on display.The triptych was then shown for the summer at Gulf of Georgia. It was then selected to be in the Minoru window of Richmond Art Gallery for a show that fall.
Then it came back home. Shortly after, an opportunity arose to display it in the Richmond offices of financial advisor David J. Wright. Here, it was enjoyed for about four years but then David moved to Vancouver offices. I felt that as it was something the public enjoyed, it should be shown in a place where the general community could enjoy it. Richmond Hospital Foundation was pleased to accept the triptych for permanent display in Richmond Hospital. It has now been installed in the waiting area for Diagnostic Imaging . Last Thursday, I was able to go over to the hospital to see the painting on the wall and Kay Sakata was happy to see her garden up for everyone to enjoy. Pictures were taken for the hospital newsletter so people who haven't seen the garden yet, can hear about it. "Mrs. Sakata's Garden" is in Gallery Two. Photo shows its present location and Kay Sakata and me.
Posted by Loraine Wellman (lorainewellman@shaw.ca) at 11:56 AM No comments: 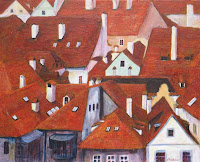 More rain this weekend and all the more reason to think of sunnier times. One painting that I finished of Cesky Krumlov is up at Omega Gallery (27th and Dunbar) and will be part of a group show, opening December 7th. Cesky Krumlov is more medieval and Prague is more baroque but Cesky Krumlov is still like a smaller version of Prague - the river loops around it, the castle is on the hill, the old town is centered on a town square... and the rooftops are mostly red tile . This was fun to paint -including the chimneys with their own little roofs. One of the things I like about acrylics is their layering ability - so getting the sun and shadow on the roof tops was an exercise in glazing as well as building up texture. A lot of the buildings had false fronts added - reminded me of the Old West towns with more important looking facades tacked onto an old building. Because I was looking at the rooftops from the other side, some of the decorative fronts can be seen poking up at the fronts of the buildings. I don't think I'm finished with rooftops yet!
Posted by Loraine Wellman (lorainewellman@shaw.ca) at 3:20 PM No comments: