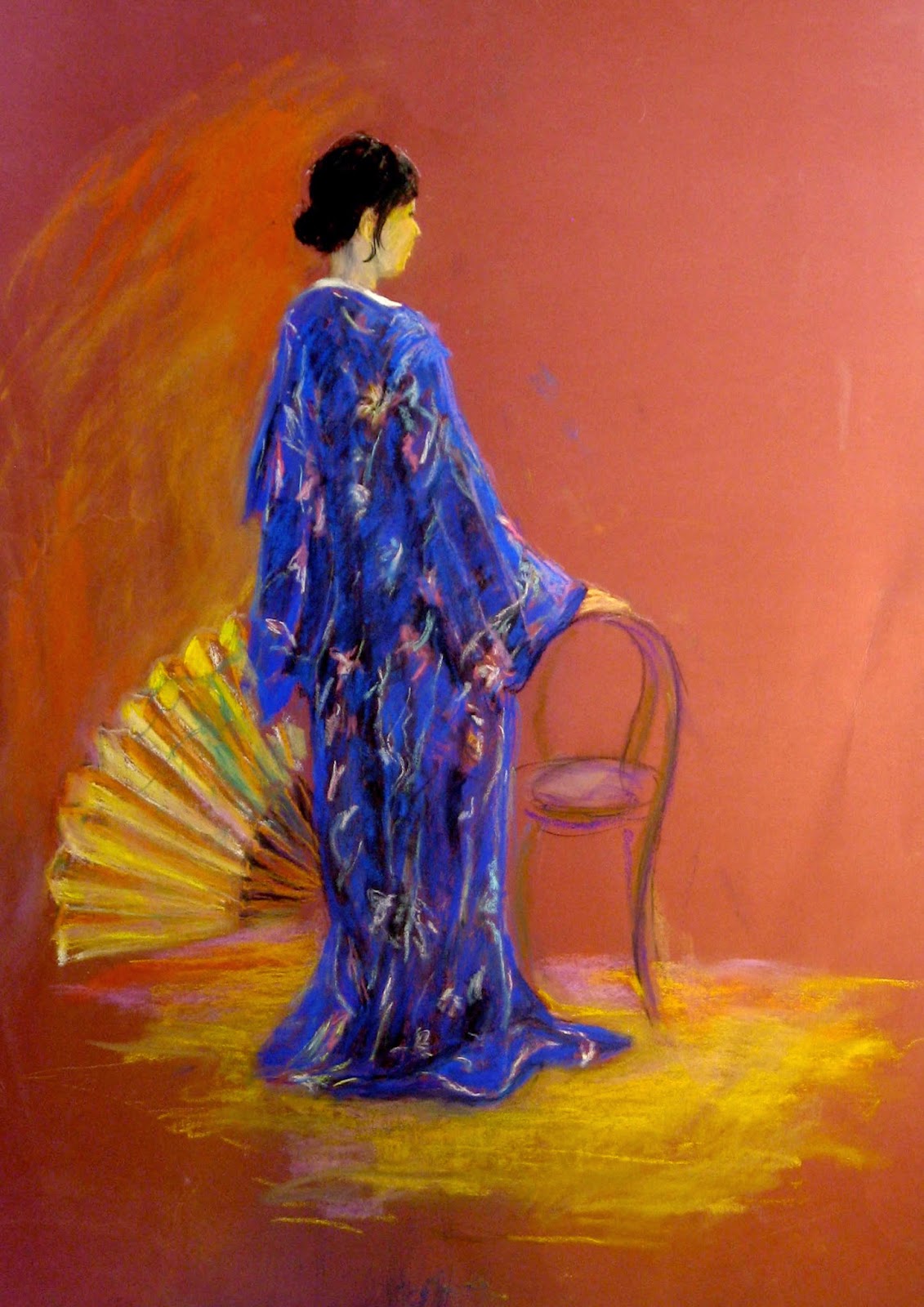 I'm currently re-reading one of my favourite inspirational art books--"Creative Authenticity- 16 Principles to Clarify and Deepen your Artistic Vision"- by Ian Roberts. The first principle si Searching for Beauty. Ian says the book is not for those who would like to create but are too timid to get started- it is "a book for people who are in the thick of the creative struggle." He says "interestingly, we have come to the point in the contemporary art world where beauty is suspect as an aim in art." He goes on to explain that he doesn't mean pretty or sweet and that a great, powerful, beautiful painting - Goya's "The Third of May 1808" can also be horrifying. It is moving.
I love where Ian trashes  "the technology of the media  as the vehicle of art, in which the means of communication alone is considered relevant, even devoid of any content". He talks of videos that go on and on leading nowhere. That reminded me of one I saw recently -  in an art gallery--it was as if it was termed "artistic" because it was lousy photography with no point.
"Life cannot be lived well without standards . Art, as a part of our life, would obviously seem to benefit from standards as well...... I think new standards of meaningfulness in art are resurfacing. Which is where authenticity comes in. Standards that are transformative, that will last, will have to come from a deep, quiet harbor of spirit if they are to anchor us today."
This book is one that makes an artist question the process and really think about directions and what the artist is trying to express. We all need to  work on our own growth and our authenticity so that our work will matter.
The drawing is a pastel of Yui in a casual kimono. I tried to capture her beauty and grace. This was a long pose at Life Drawing and is posted in on Pinterest on my Life Drawing folio. I like life drawing because it is always a challenge to capture the beauty of the human figure - even when not necessarily what modern conventions would call "beauty." There is a beautiful person within  and I want to be "authentic" in showing that. I'm currently trying to move in a slightly different direction in some work. This piece is more conventionally realistic  than some things I am trying -although I elongated her a little bit to stress the quiet elegance.


Posted by Loraine Wellman (lorainewellman@shaw.ca) at 10:04 PM No comments: 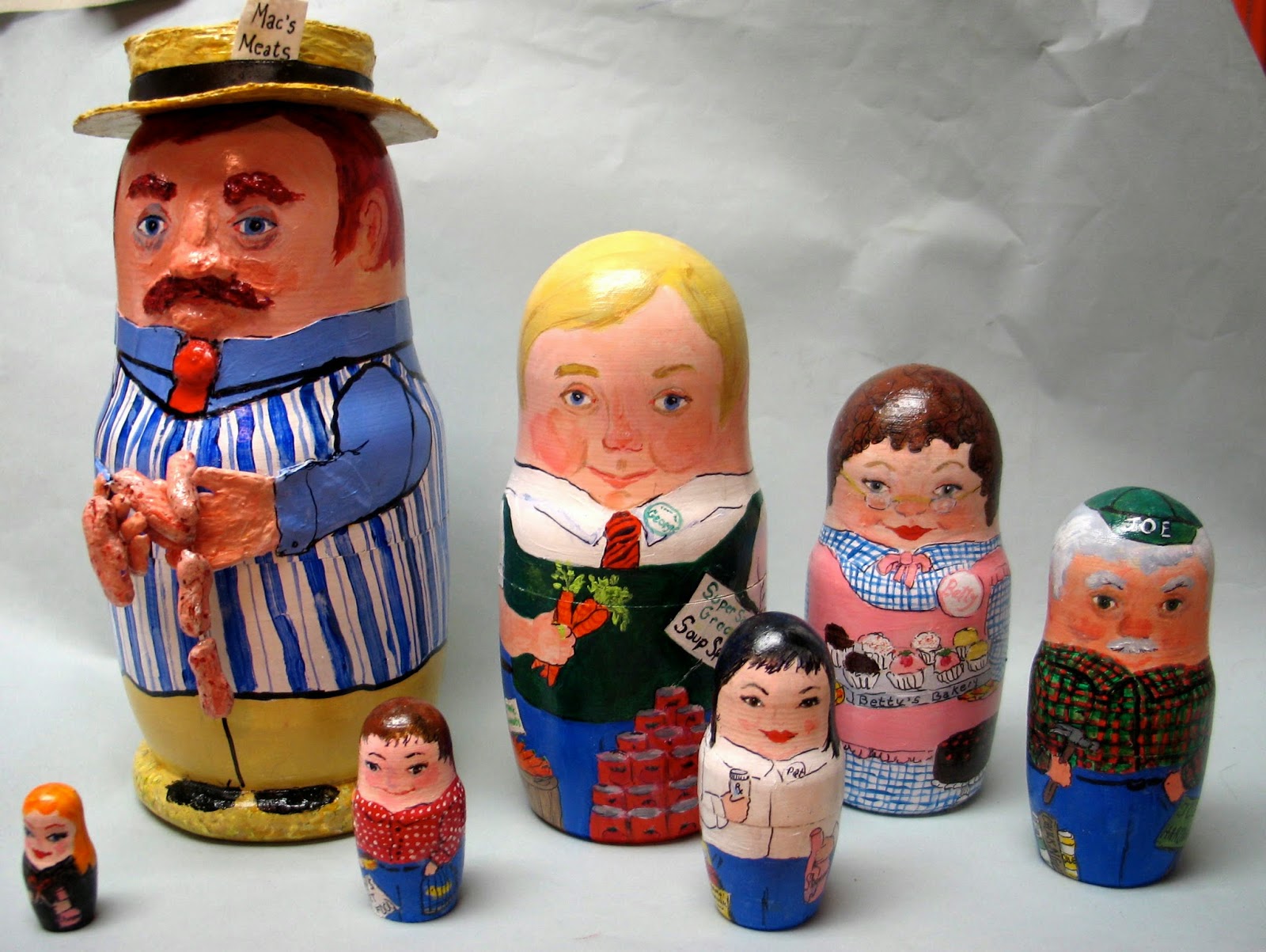 I've been working away on these for ages and finally got them all done and varnished. the idea is that they are store owners from a shopping mall, circa 1950's. They were painted from a set of blanks that were made in Russia. I gessoed the blanks and painted them in acrylics. The outside one has an added hat,nose, eyebrows and mustache as well as an arm extension and hands to hold sausages. The others  have to fit inside each other, so are all just painted. 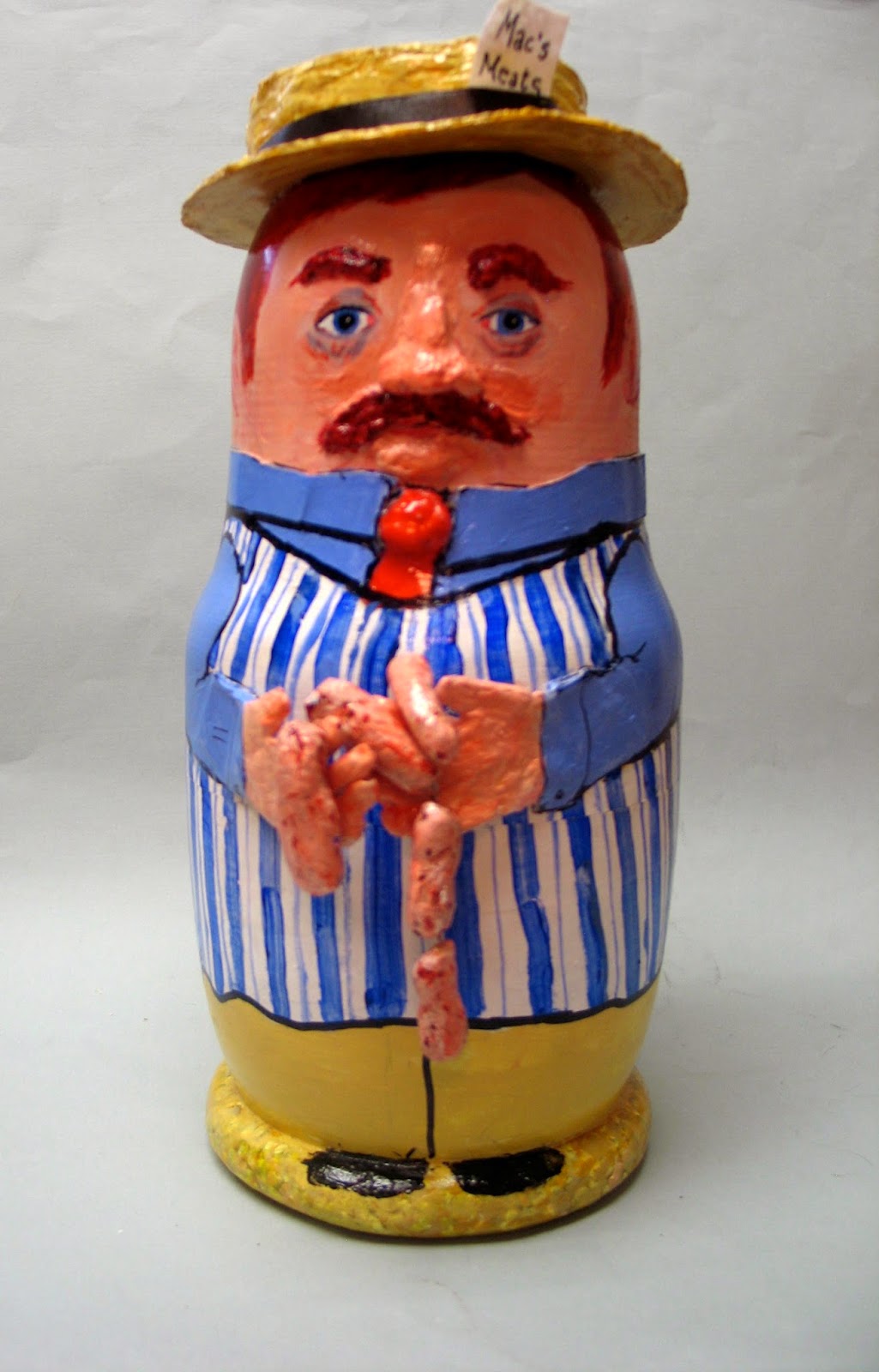 Mac of Mac's Meats is the outside doll and wears what used to be the traditional butcher's straw hat and striped apron. He holds sausages which were made from acrylic molding paste. 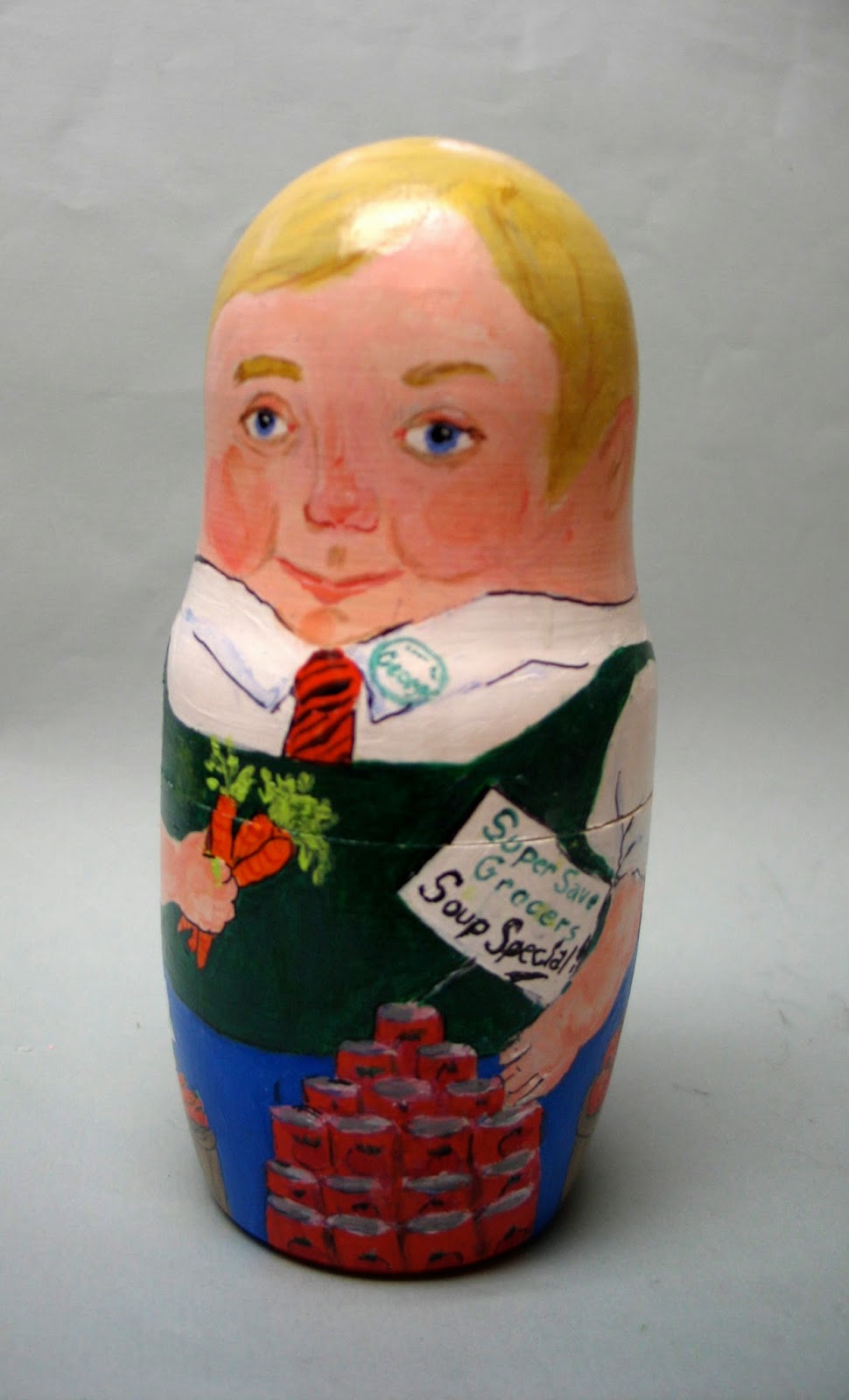 The second doll is George of Super Save Grocery. He stands beside a display of sale-priced tomato soup and holds organic carrots from a bushel basket. Obviously a man ahead of his time featuring organic produce ! - but, besides a bin of apples, he also has a bin of candy bars. 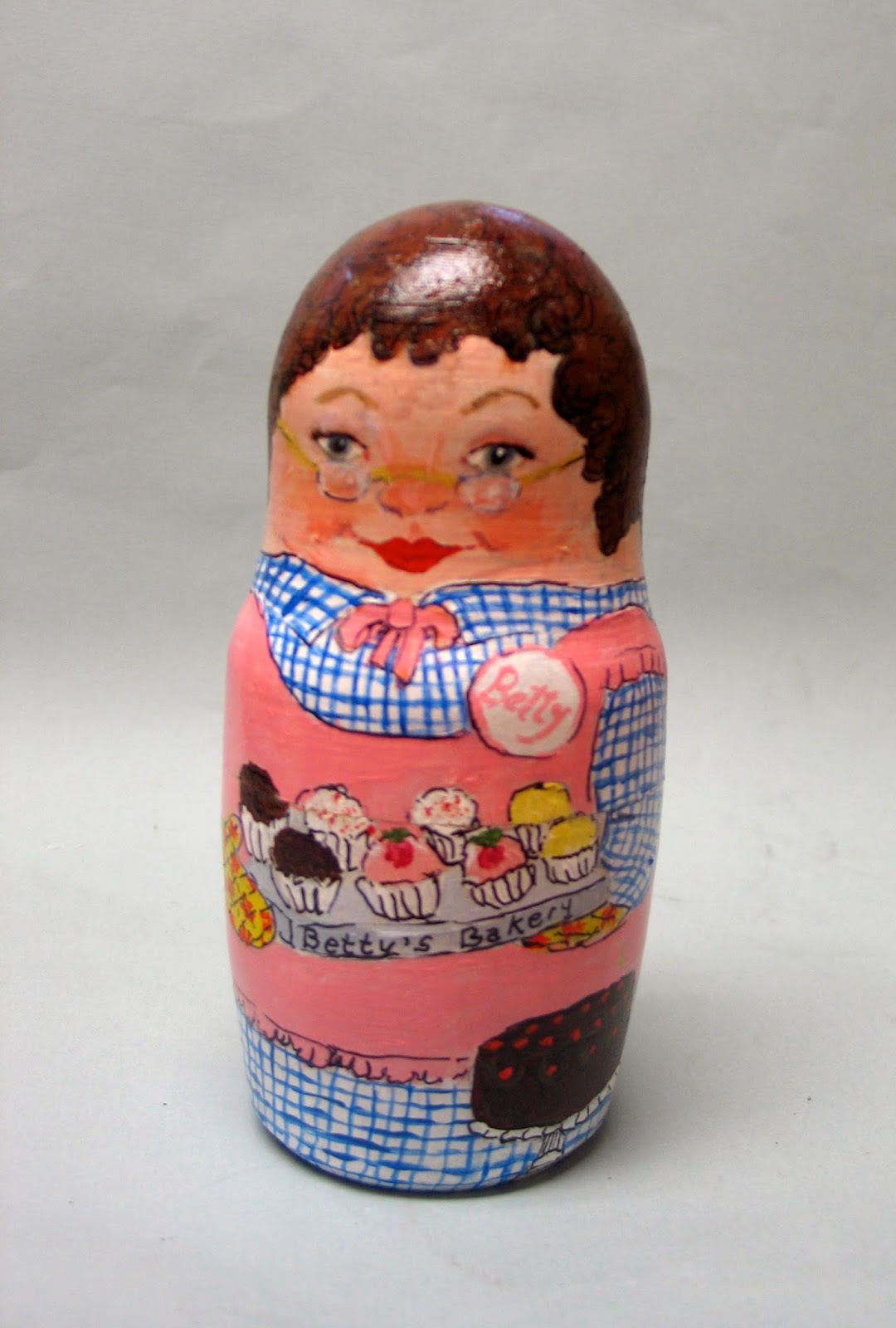 The third doll is Betty of Betty's Bakery. She wears a gingham dress and a pink apron with a large bow at the back. She has quilted oven mitts on her hands and displays a tray of cupcakes and a chocolate cake with cherries on it. On the other side, she has a tiered display of cookies. 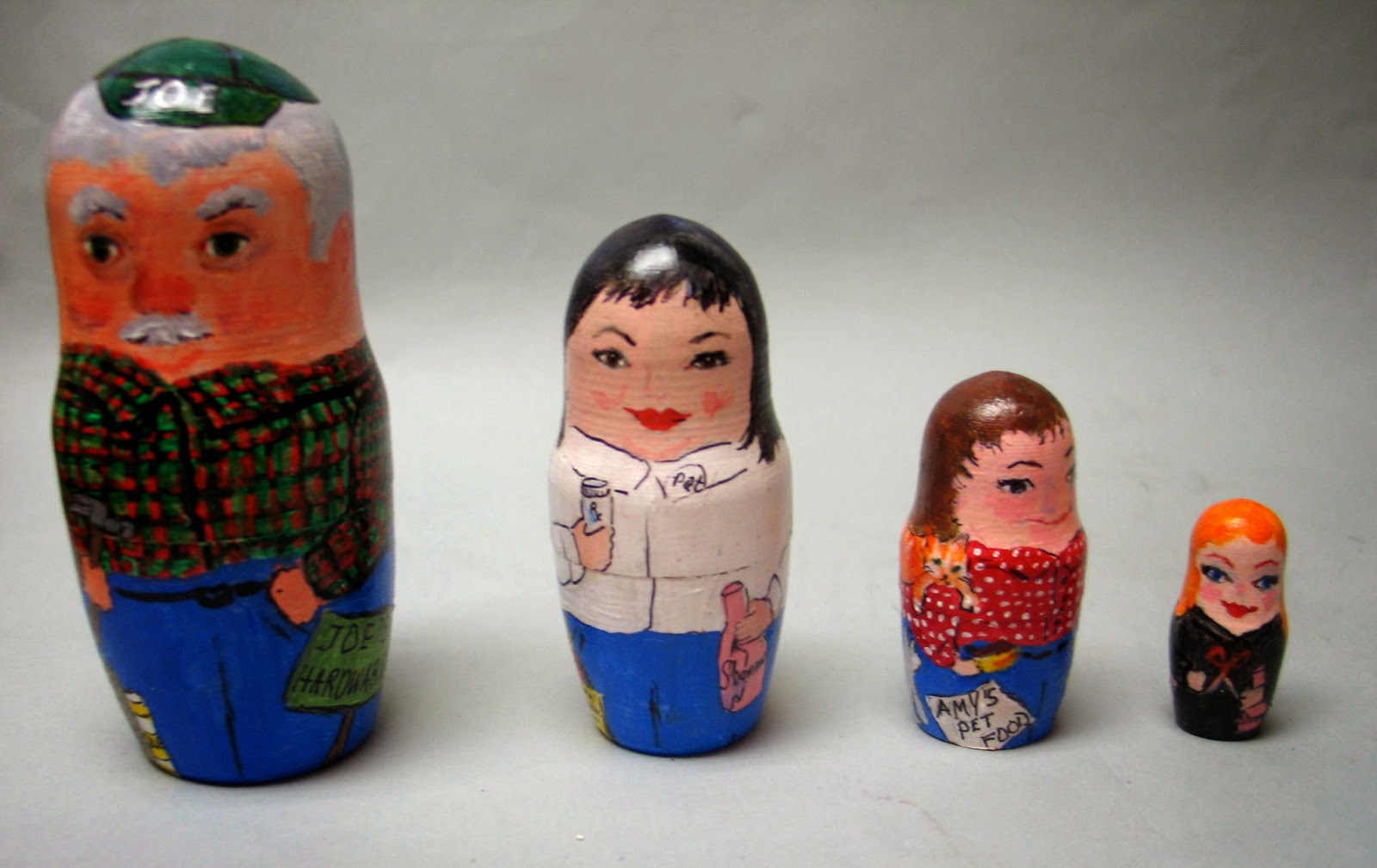 The final four smaller dolls are: Joe of Joe's Hardware. He is carrying a hammer  and displays a variety of goods such as grass seed and bone meal, a broom and shovel, nails, screws and caulking. A practical man ready to help out with advice, he is dressed practically in a plaid shirt and blue jeans.  Next is Pat of Pat's Pharmacy,  looking professional in her white jacket while carrying a prescription in one hand and shampoo in the other. On the other side there is a display of toothpaste as well as one of magazines. Then next is Amy of Amy's Pet Foods, bird cage in hand while one cat is on her shoulder and another is also gazing at the food dish. A large bag of dog food is on the other side. Last is Barbara of Barbara's Beauty Salon - holding scissors and shampoo while a display of nail polish is on the other side. She is smartly dressed in black and displays her gorgeously coloured tresses.
Posted by Loraine Wellman (lorainewellman@shaw.ca) at 4:48 PM 1 comment:

Separation of art from daily life- 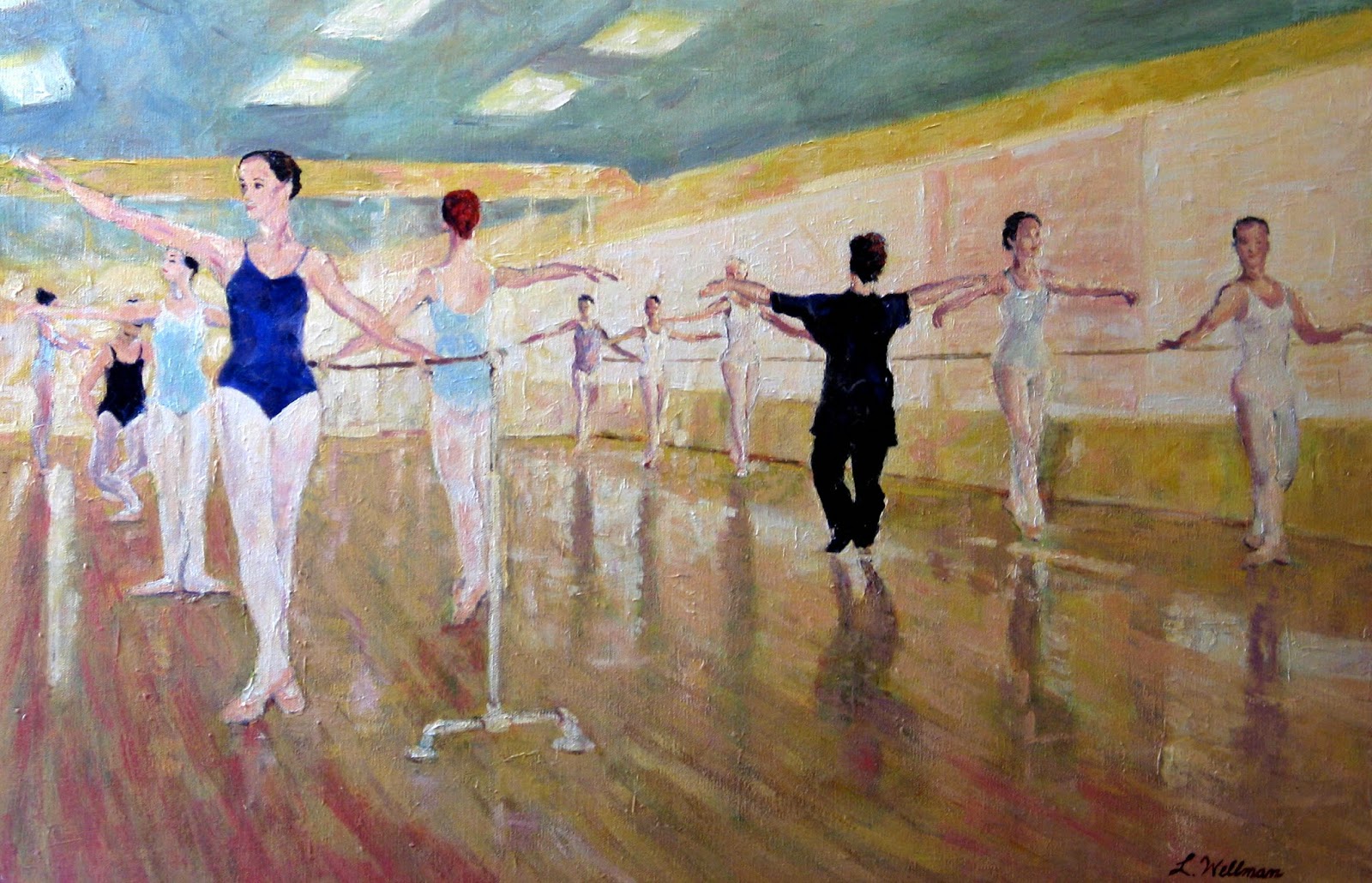 I was re-reading "The View From the Studio Door" by Ted Orland. He certainly makes some important points. "Artists today work in the face of some very large problems. These are the big ones:
ART plays no clear role in our culture
ARTISTS have little direct contact with their audience
ART MAKING is indulged, but rarely rewarded"
Later he says "Step outside the arts community, and the separation of art from daily life is so complete that many people rarely give even a passing thought to the value of art in their lives."
I think, alas, that he is probably right.  It is hard to know how to keep presenting art to make people realize its importance. Politicians like to talk up the arts - and then give main support to sports! I think one thing that would help is free admission to art galleries. There is a fairly hefty fee for Vancouver Art Gallery and I now hear that it  costs $20 to go to the Ontario Art Gallery -plus $25 more if you want to see the  current featured exhibit of Basquiat! Not too many people are going to take the family to that. In London, the National Gallery is free. It would certainly help encourage people to take a look at the offerings if they weren't charged for entering.
In the meantime, our art community in Richmond keeps trying to make a difference. This "Afternoon Class" painting was one of a ballet series I did. I liked the sun gleaming on the polished floors and the contrast of the instructor in black while almost all the students are in pastels. Too bad the instructor did not have a big stick and then it would have been like Degas' painting with the instructor. It has now been framed and will be going to Richmond Hospital to bring a little  more art  on the walls. We try.

Posted by Loraine Wellman (lorainewellman@shaw.ca) at 10:35 PM No comments:

Email ThisBlogThis!Share to TwitterShare to FacebookShare to Pinterest
Labels: "Afternoon Class", cost of admission to art galleries, separation of art from daily life, Ted Orland, The View From the Studio Door 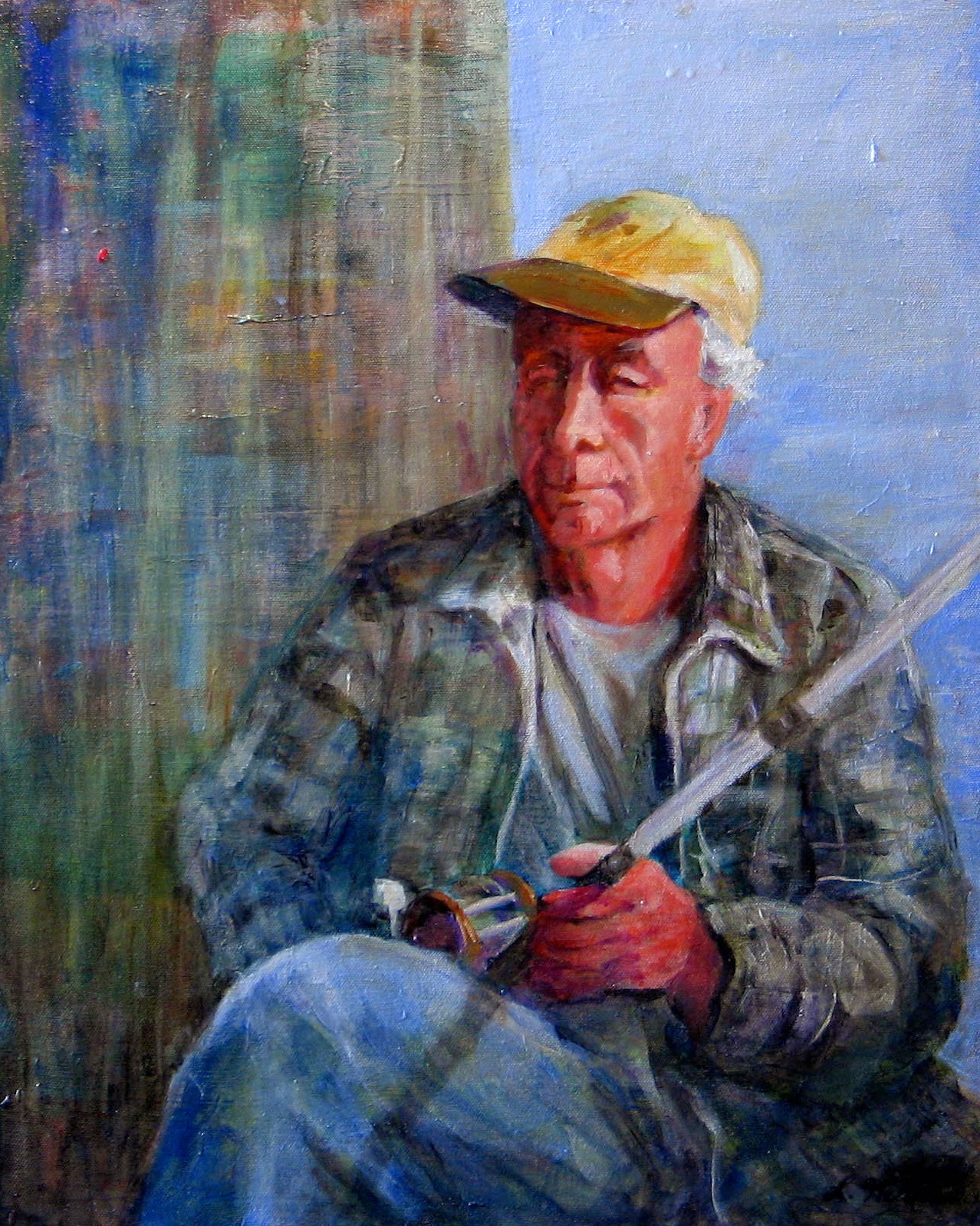 Here is the full painting of Bob that I used for the February newsletter. This is acrylic on canvas and was a studio painting painted from the pastel done from life, aided with two reference photos. I used the pastel for the January newsletter. Some people call pastels "pastel paintings", but I think of them as drawings as I leave a fair bit of the coloured paper uncovered.  The acrylic painting is much more solid because the whole canvas is covered in paint. The pastel is on the blog for December 14th
Today is the first Sunday in February and there will be some special clown services in some churches - one takes place in Hackney, London. Usually, it is dedicated to Joseph Grimaldi - the outside nesting doll in my last post. Who knew?
Posted by Loraine Wellman (lorainewellman@shaw.ca) at 9:57 AM No comments: