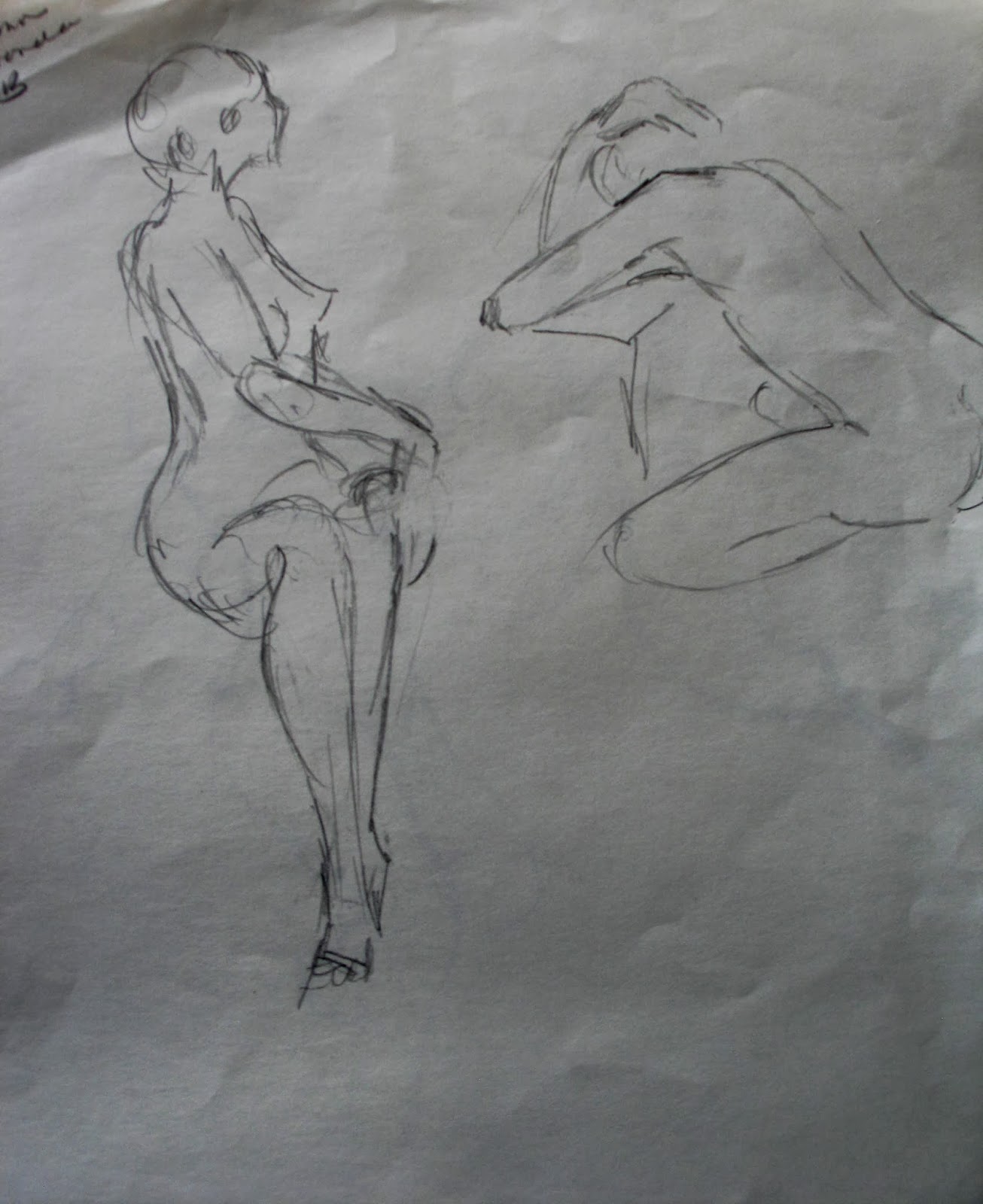 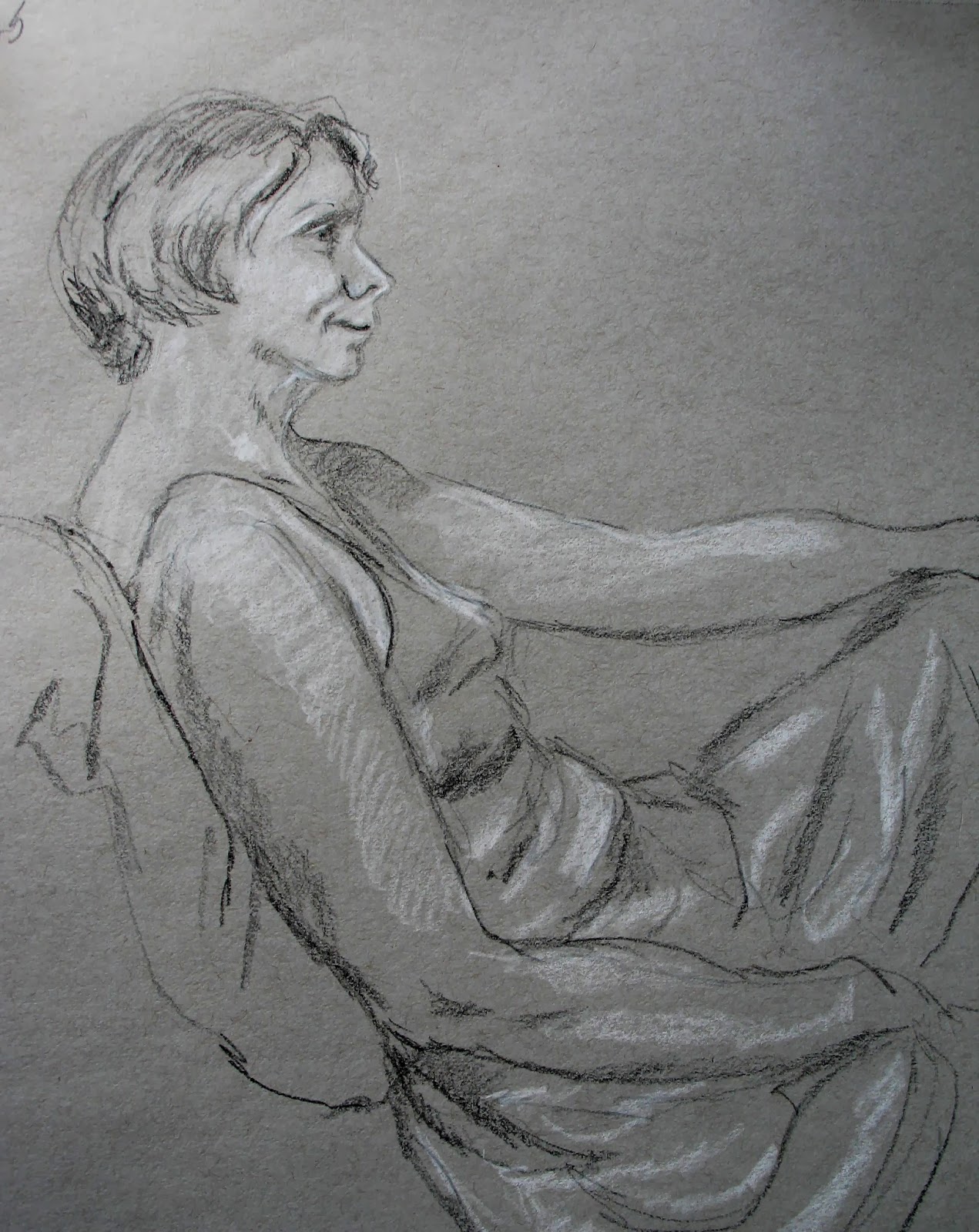 Here is some of what I did last night- back to pencil. The first one is part of the warm-ups - two sketches each of 2 minutes with a 6-B pencil.  (Just on some old paper and you can see the difference in the photograph - the longer pose is on nicer paper in a pad.) It  is black and white Prismacolor pencil crayons on grey paper. The idea for the first ones is to get the general idea and proportions and get your hand and eye ready to go on. The 25-minute one  is a tonal-value study. Right now I am working on a set of these but I'll go back to colour again! It is good practice to look for the lightest and the darkest and just work *without* colour for a change. I've started a category on my Pinterest that is all just some of my work in Life Drawing sessions. I thought it might be fun to assemble them somewhere - so that is where they are - as well as sitting in a pile in a cupboard!
Posted by Loraine Wellman (lorainewellman@shaw.ca) at 8:31 PM No comments:

I was just reading another post where an art story from Italy was reported. An "art display" got tidied up by the gallery cleaning staff. Apparently part of it consisted of broken cookies on the floor. No wonder there was confusion. Personally, I am a little tired of "installations" that consist of trashy items. If it looks like part of a teenage bedroom, to me it isn't art. I think art has to involve some creation, not just assemblage. There should be some evidence of the hand of the creator- brushstrokes in a painting, for example. Given the same items and the same space, two people could duplicate an assemblage - so where is the art? I'm with the cleaning lady- and against cookie crumbs on the floor.
This post's painting is the "Card Shark" from last year's Dirty Thirties drawing marathon. Great model. Can you tell he is the same person as the "Rum Runner"? Here he has on a wig. He has a great collection of costumes and is great at holding a pose.
Posted by Loraine Wellman (lorainewellman@shaw.ca) at 12:21 PM No comments:

Email ThisBlogThis!Share to TwitterShare to FacebookShare to Pinterest
Labels: art or trash?, assemblages, Card Shark, evidence of creator's hand, installations, what is art? 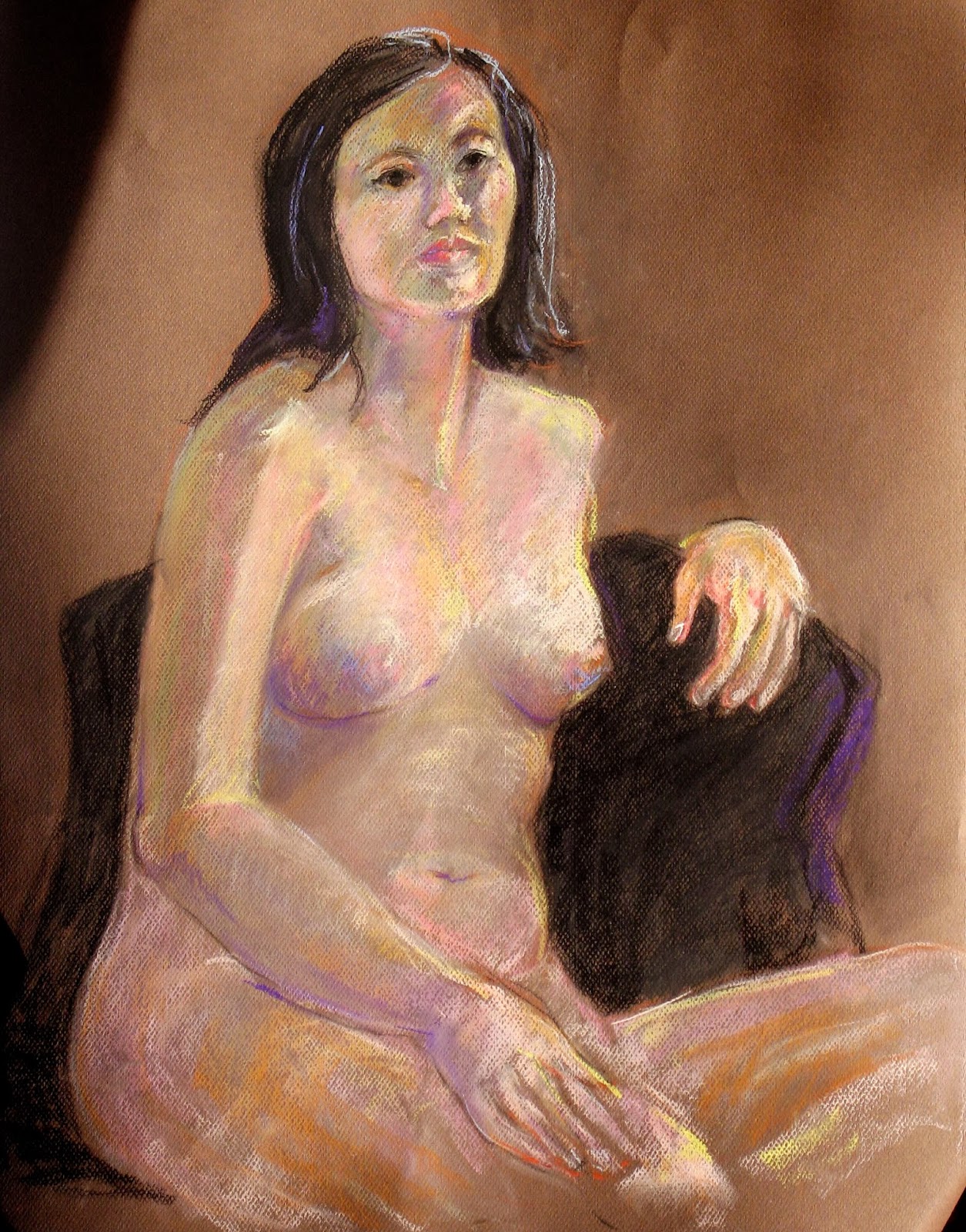 This is what I did at our Life Drawing session today. Then I made two decisions. One was to  sign and date my drawings that I'm currently keeping. The other decision was to make a new category for my Pinterest and have it just all drawings from Life Drawing - and just my own work on that one. Some of my cat paintings are on my "Cats" category but there are other cats too. I used a fairly dark brown pastel paper for this one and also used some soft pastels as well as my harder ones - and some of the powder ones that come in dishes too. This was about 2 and a half hours of work- maybe a little less- hard to figure out how long the breaks were. Upper left corner was a shadow on the paper when it was photographed. I felt it worked fairly well- lots of colours, lots of layering, I was almost going to do a drawing that was more profile and had rim lighting- but then I thought she had an interesting face so I wanted a better view of her face. I also liked the hand placement. I chose to cut off the lower body because I thought it made a better composition with the hands leading your eye back up the face and around again. Including the feet would have meant the head would be much smaller - and, it was the face that I found especially appealing so I didn't want it to be miniscule. I draw smaller, usually, on Wednesday nights so I needed to work larger again. I'll have to try to photograph my black and white pencil (on gray paper) drawings that I have been doing. Of course, they aren't as finished pieces since they are mostly only about 20-minute poses.
Posted by Loraine Wellman (lorainewellman@shaw.ca) at 9:10 PM No comments:

Value from a critique 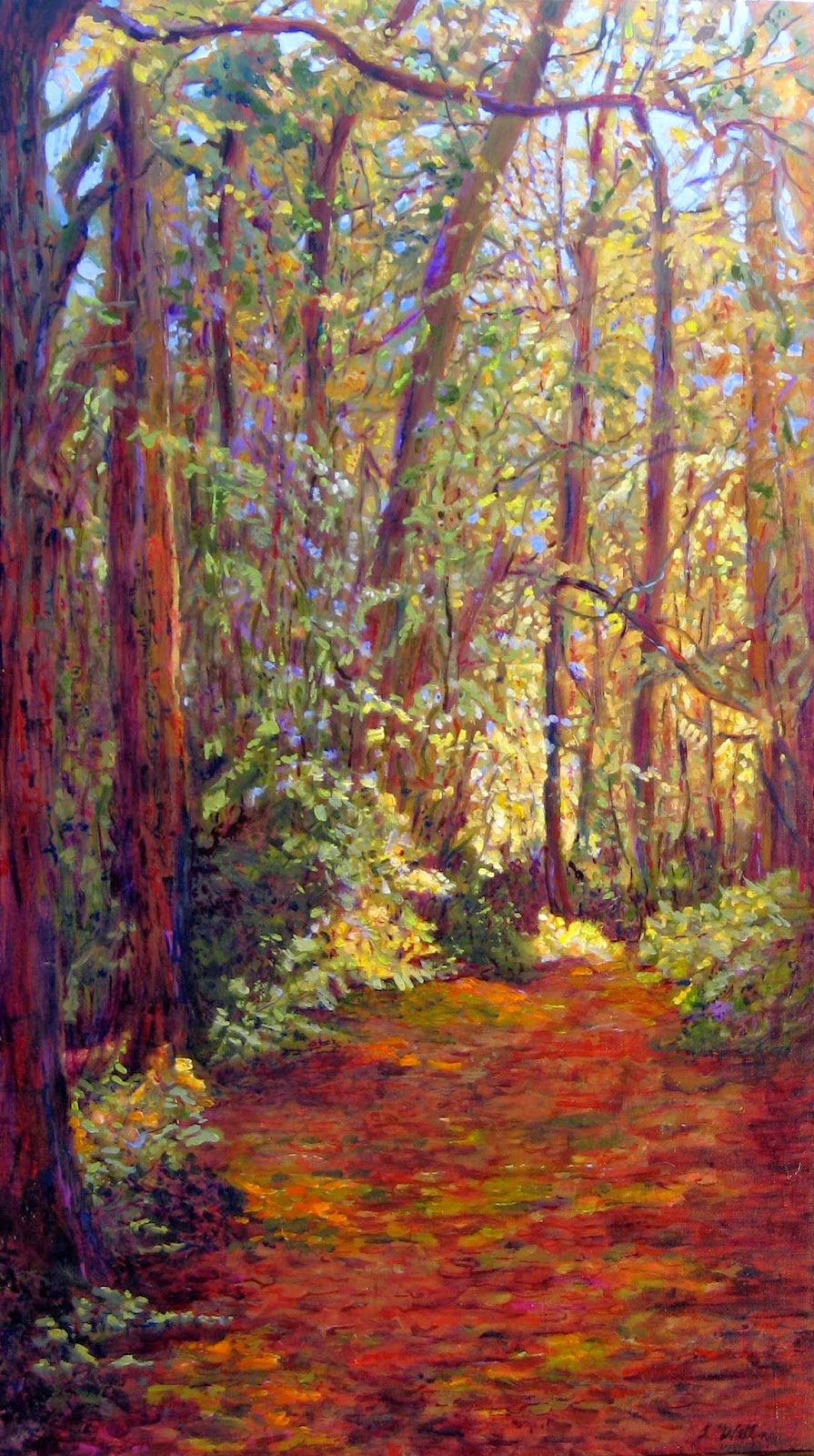 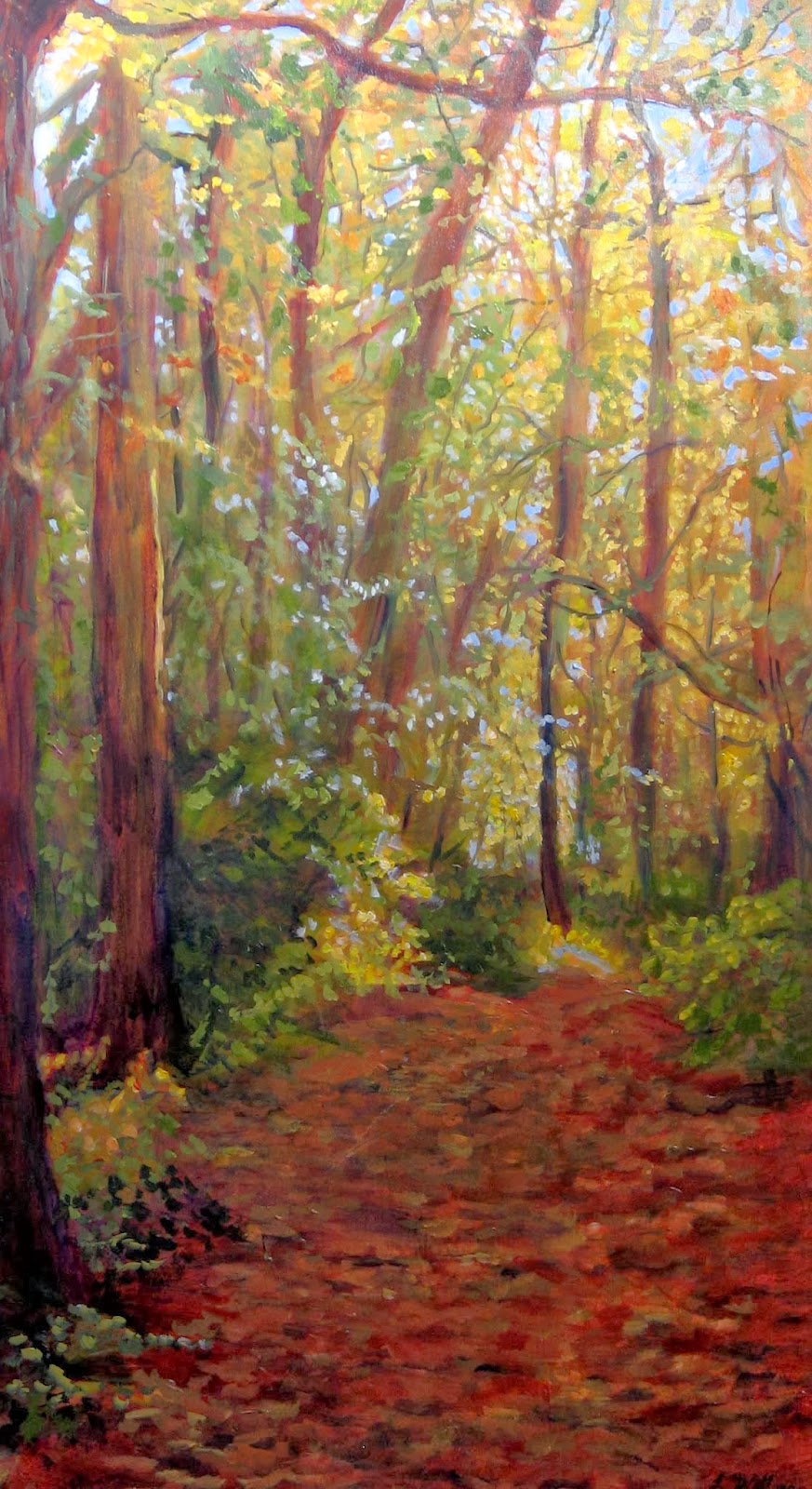 At our critique in December.I took my Lanterns painting -posted December 29th on this blogsite and also used on my January newsletter.  I found the comments worthwhile.  But, of course, I was also listening- and learning, which is such an ongoing thing in the world of art, from comments on paintings by others. One other artist had a path through the woods and one of the comments was to not make it such a straight-forward path but to break it up with shadows and colour changes. So, thinking about that, I decided to revise my "In the Woods". I was also thinking of Lalita's comments that whatever it is that you do- be it colour emphasis or shape emphasis, for example- do it *more*. I love colour so I decided to push it even more for the revision. I think it works as I find the painting more lively and appealing.  I've just taken it - and also "Lanterns" to hang in the rotunda at Richmond Art Centre with the Guild display. The paintings will be up until March 9th." Lanterns" is 16 by 20 and "In the Woods" is 36 by 20. Both are acrylics on canvas. The show also has oils and watercolours.
Posted by Loraine Wellman (lorainewellman@shaw.ca) at 5:05 PM No comments:

Email ThisBlogThis!Share to TwitterShare to FacebookShare to Pinterest
Labels: critique value, doing more of what your emphasis is, revising a painting, rotunda display 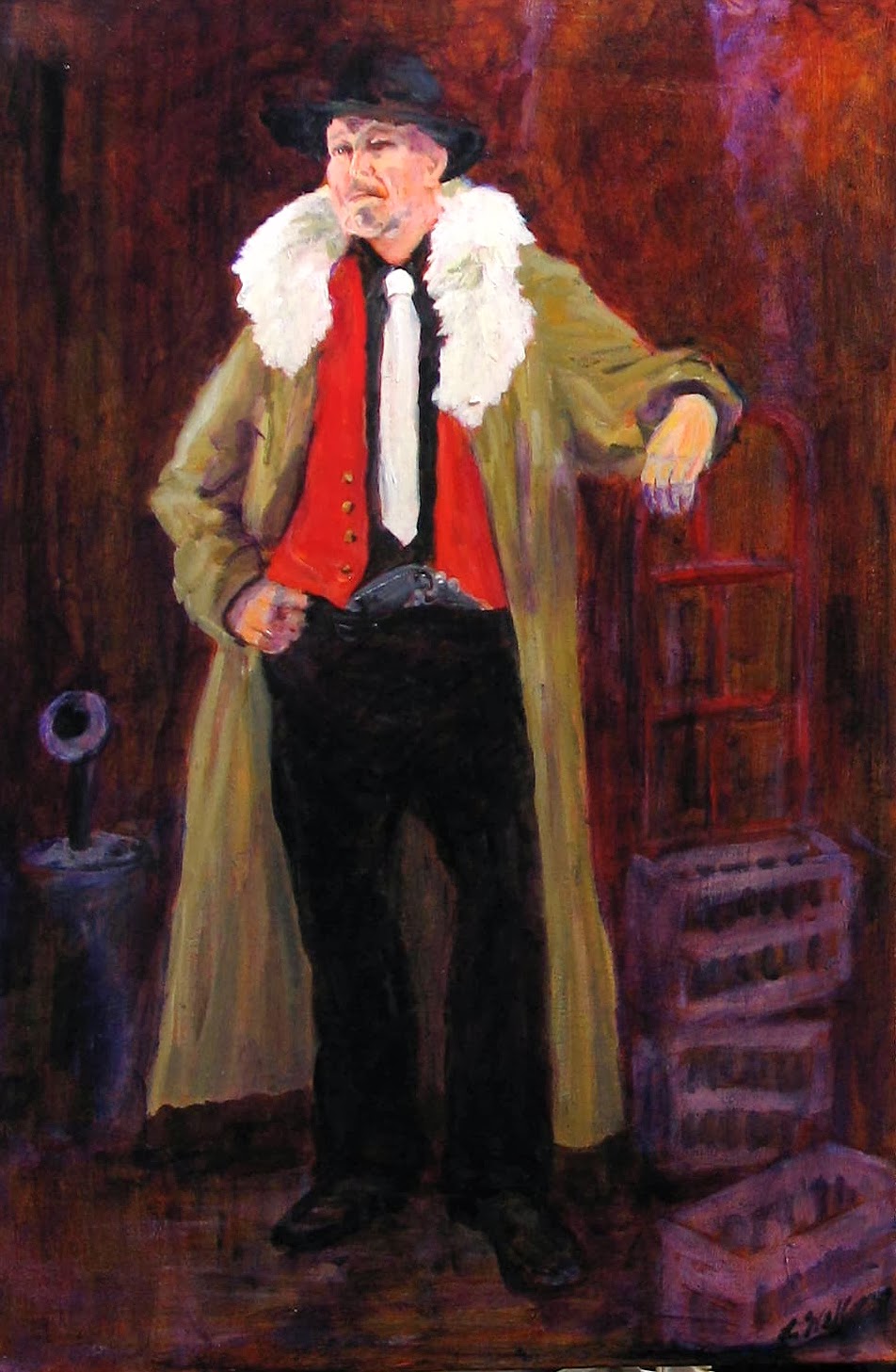 I went to see "Art" at Gateway Theatre today.  As  Stephen Drover in his 'Director's notes' says: "Art" as the quotation marks in the title of the play would suggest is not really about art. It's more about what art opens up.Oscar Wilde suggested that "All art is quite useless", proposing that art generally does not have a whole lot of inherent value. But what *is* valuable is what it can do to us: how it can change our opinions about something, how it can spur us on to action, how it can make us look at each other and ourselves in new ways. As a theatre artist, I am most satisfied when an audience after a show is not talking about the play but about the feelings, ideas and dreams that the play awakens in them. Art as a sort of can opener, releasing important human stuff.
The quotation marks also suggest that art is what we make it; that honouring something with the title of  "Art" is a matter of opinion. One person's art is another person's junk.
In our play, one friend buys a painting, finds value in it and call it "art". Another friend sees no value in it and thinks it is junk. And the third friend does not know what to think. They discuss, they argue, they fight. A world of conflict is opened up between them and they are forced to reassess their friendship, how they see themselves, the choices they have made in their lives and how they can proceed as people.
It's not about art. It's about what art makes you look at. Perhaps that's the value."
-which I thought was excellent and worth repeating here. I can certainly like art of many different styles- but I don't like everything that is called "art". One thing I would definitely draw the line on calling art is a shark preserved in - I think formaldehyde - in a tank.
My painting here - which I hope is art- is "The Rum-Runner" from last year's "Dirty Thirties" marathon.


Posted by Loraine Wellman (lorainewellman@shaw.ca) at 10:05 PM No comments: 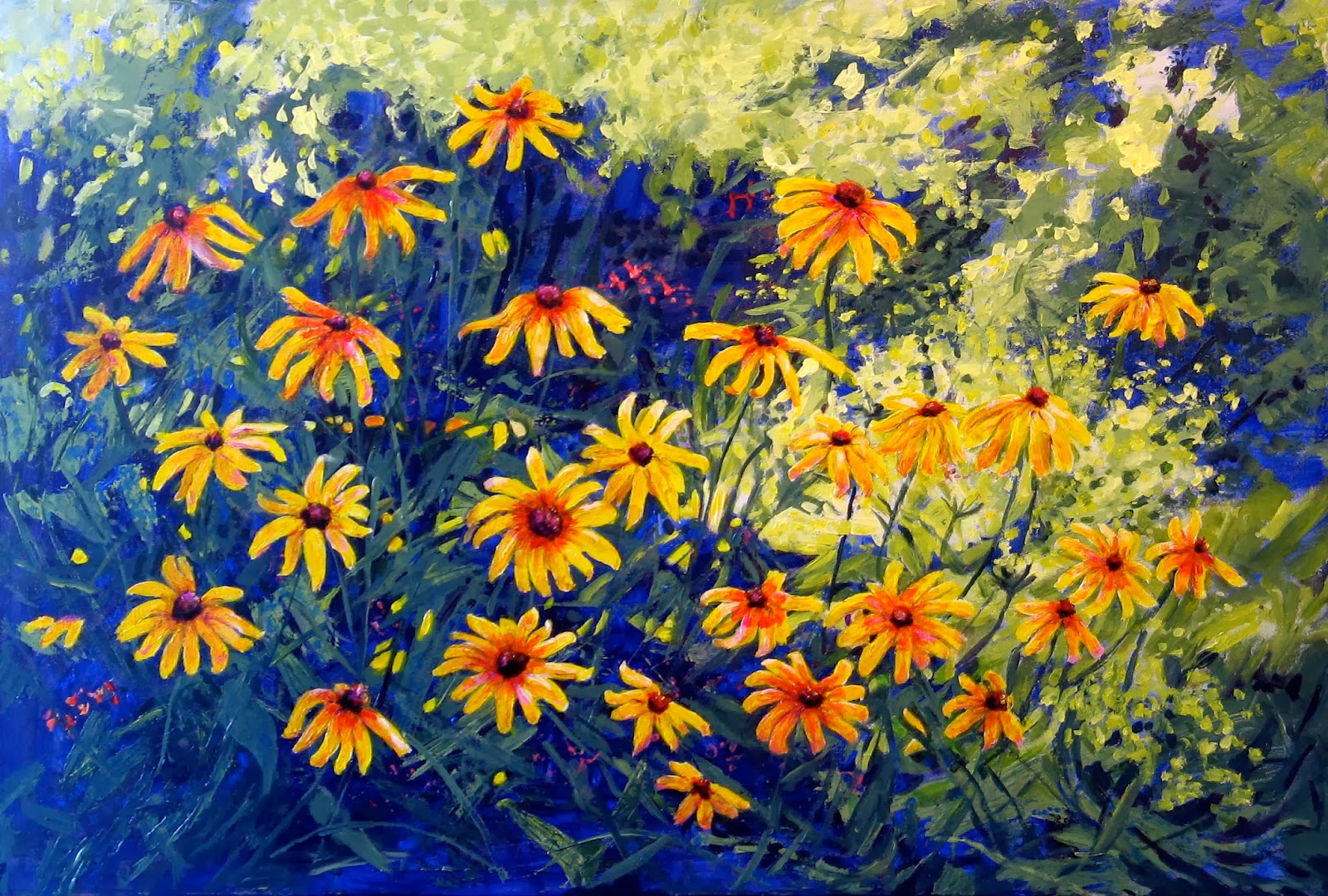 This is the first of two rudbeckia paintings done recently. I started with a fairly abstract dark background with a couple of lighter areas and then had fun slashing on greens with a palette knife and other implements. When I worked out the placing of the flower heads, I sketched them in with chalk and then painted them white- so the yellows, especially, would show up. Yellow is always a weak pigment and I wanted the flowers bold enough. Leaving dark underneath would set me up for a losing battle. I wanted a garden-bed feeling but not a photographic rendering. I also wanted it sunny and uplifting. I then developed the flowers and started cutting in - both with lights and darks- on the greenery- trying for some definition but not having it too precise. I wanted the greenery to be complicated and varied --- so that there is always  "more" to see.  Recently, I was looking an an "app" that a friend showed me- how to turn a photograph into a "watercolour" without lifting a brush. Interesting - but is it art? I think a painting has to have the artist's spirit in it. But, obviously, this app will be popular with those who just want to fill a wall space. I just hope it doesn't lead to more cheating in art competitions - like the infamous national watercolour contest scandal a few years back. At any rate, the paint is thick enough on this painting and the colours and effects complicated enough that there is no way it could be duplicated by an app.  I'm on a bit of a "floral kick" right now and may have a number of new paintings by the time DoorsOpen occurs at the beginning of June,
Posted by Loraine Wellman (lorainewellman@shaw.ca) at 11:42 AM No comments: 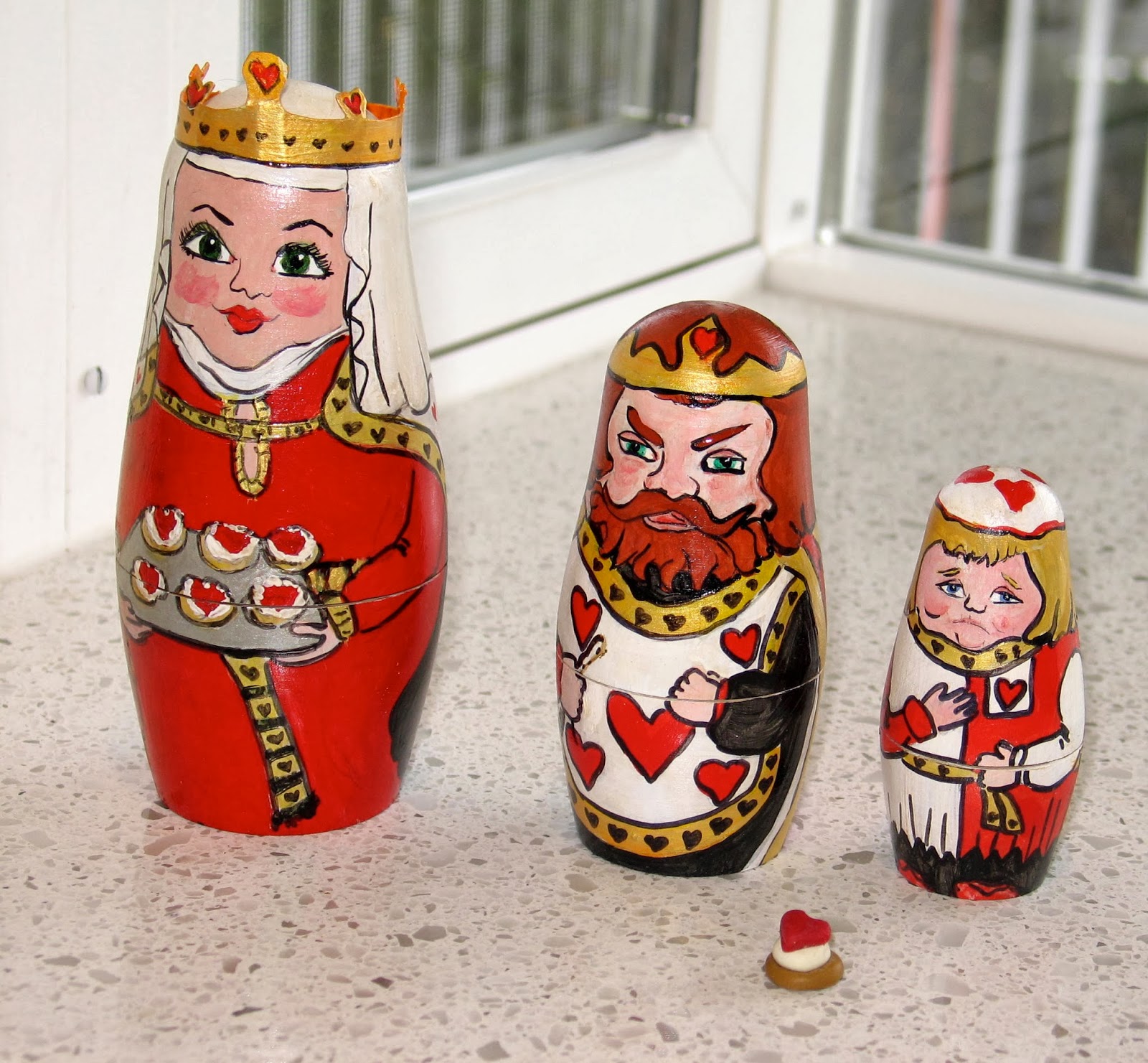 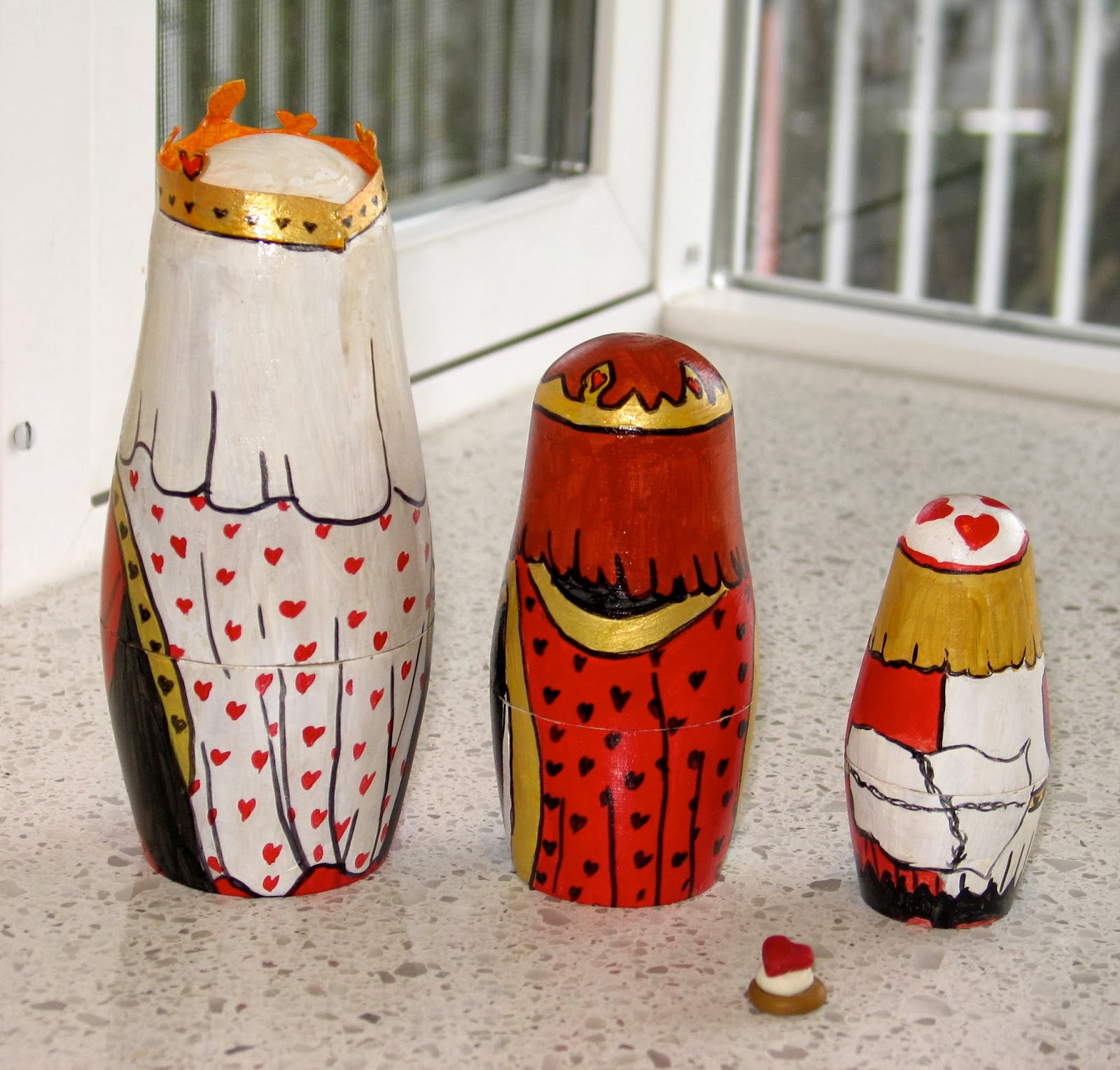 Here are the featured nesting dolls for February- the "Queen of Hearts" set that I painted in 1996. I'm showing front and back views. The Queen shows off her tarts, the King has a stick to take to the Knave and the Knave has tied a cushion to his tender rear. The last piece is a tart. Since I only used the three outside parts of the wooden nesting dolls, I used the "leftover" smaller bits to make a very small snowman set. When I paint a set of nesting dolls, I first gesso them and sand slightly. Then they are painted in acrylics and finished with a gloss acrylic varnish . Sometimes they have to have a bit of sanding with fine sandpaper at the joins, then I use beeswax to rub along the joins so that they will come apart easily and not stick. The outside dolls can have accessories such as the crown or a lot of modelling as there is no fitting inside to think about. I find it really adds to the fun to make a three-dimensional addition to the outside doll of a set. I don't remember if I used Fimo or modelling paste to make the tart. I have a general plan when I start a set but I also find that once the painting starts, extra ideas for embellishment flow.
Posted by Loraine Wellman (lorainewellman@shaw.ca) at 8:09 PM No comments: