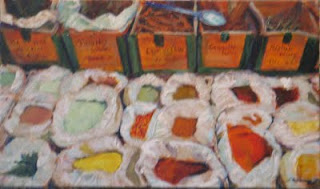 The new issue of the Federation of Canadian Artist's magazine, Art Avenue, is now out and my painting, Spices, is in it on the page about Summer Gallery. This was a fun painting as it is quite textured. I also did a lot of glazing to build up those wonderful "spicy" colours. Anyway- nice to see it - even if they did misspell my name. So many people feel they need to "correct" the spelling - but I *am* a one-R Loraine. My mother gave me three names - two grandmother's and one just for me (Loraine) so she felt she had to eliminate something. I'm glad she did- it is a little different- but I do wish other people would spell my name in my way!
Posted by Loraine Wellman (lorainewellman@shaw.ca) at 4:17 PM No comments: 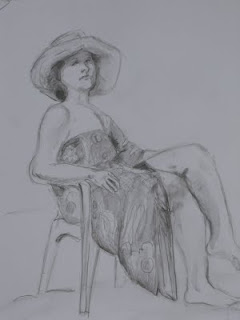 Here is the water-soluble graphite sketch that was supposed to go with the last post. Just when I think I'm honing my technological skills, my program starts balking at adding the images! ...anyway, this Helene in an 8 by 11 sketchbook at our Life Drawing summer party...
Posted by Loraine Wellman (lorainewellman@shaw.ca) at 12:54 PM No comments:

Last night was Life Drawing and for this group, I'm working in a sketchbook - sometimes with ink but mostly with water-soluble graphite pencils. With them, a person draws - and erases- as with a regular pencil. Then, with a brush dipped in plain water, the drawing is "fixed"and also blends so that shadows become washes. It works very nicely as it involves carrying a light load on supplies. Now, one sketchbook is completed. On the reading front, I am now into volume two of the Matisse biography - Matisse the Master- up to page 173 and WWI has begun.
Posted by Loraine Wellman (lorainewellman@shaw.ca) at 3:51 PM No comments: 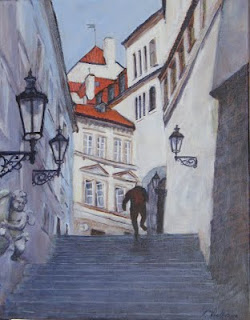 I think if I wasn't an artist, I might be a reference librarian. I love pursuing "leads" that crop up in my reading- and the Matisse biographies offer so many leads. Take Simon Bussy - artist friend - and connected to the Bloomsbury group. The Humbert scandal came after the government dealt with the Dreyfus affair. Matisse's move to a former convent ties in to the government reclaiming property and separating church and state. Student Marie Vassilieff had a canteen for penniless artists - and so on. Where would we be without Google?
Posted by Loraine Wellman (lorainewellman@shaw.ca) at 5:13 PM No comments:

I've finished (423 pages) volume one of the Matisse biography. To give credit where credit is due, it is The Unknown Matisse by Hilary Spurling. It really is a vivid text that gives such insight into life of the times. It would seem that Matisse has been mis-portrayed quite a bit- possibly due to Picasso and Gertrude Stein. Somewhat unsporting of Picasso as Matisse was supportive of him - as he was of many young artists- when he was getting his start. Now onto Matisse the Master - which was the book that began this reading episode for me. A gift from a good friend, I was about 100 pages into it when I realized I owed it to myself to read the first volume first- so now I am back at the beginning of this second volume - but with a much better background understanding! The latest issue of UBC alumni magazine mentions my painting "Mrs.Sakata's Garden" as in a previous blog. The same volume has a nice article about one of my former teachers - Gordon Smith. One of the things I most remember him saying was that it was important to be *sincere* in one's art work- as well as to not be "slick".
Posted by Loraine Wellman (lorainewellman@shaw.ca) at 8:11 PM No comments: 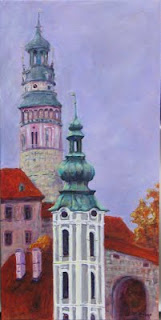 I'm thinking of a number of things. I'm reading a biography of Matisse and finding it interesting that there was such camaraderie among the artists of the time. Also, so much public interest and comment about what was painted and shown. At one point, Matisse created a bit of a stir by putting oranges into a still life- apparently a bit of an innovation. I think there is so much art these days, and so many means for people to see it as well as so much in *alternate* entertainment, that almost *everything* has been painted. Oranges are hardly innovative now! It is also interesting to read of Matisse's struggles with his ideas. Sometimes people think painting is easy and relaxing - but, really, a lot of thought goes into it. He also had family stresses besides money shortages. His in-laws had a miserable time after working for Frederic Humbert - sort of a Bernie Maddox of the time- so, at one point, they were accused of being co-conspirators. Interesting insight into the times. I recently saw "Julia and Julie" and enjoyed it for a number of reasons. But, it also made me think about blogging and if I should do it more frequently and if anybody reads it anyway! There are no recipe books to follow for an art count-down and I certainly cannot become a "painting a day" person.For one thing- where would I put them all? - so, I guess I have to limit myself to occasional musings - and I might have more to say about Matisse later. The Summer Gallery Show closes today. "Towers- Cesky Krumlov" was one of my paintings in the show.
Posted by Loraine Wellman (lorainewellman@shaw.ca) at 1:38 PM No comments: 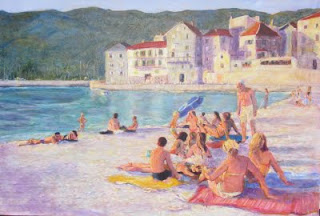 Last week I was out in Tsawwassen to "sit" the exhibition - which is a requirement for those juried into the show. (My painting in the show-which is Oil & Water - is "At the Beach") It is an interesting show with a number of good paintings - but only one has sold. I'm still trying to figure out what it is that promotes sales as there were some very reasonable prices there. Next door, at the arena, there was an antiques show. As I went back to my car, I saw some people who had bought a truly hideous - although presumably old- painting. Boring pathway, boring colours, gilt frame and large size. They could have had a pick of something worth hanging - so who knows why that was the purchase?
Posted by Loraine Wellman (lorainewellman@shaw.ca) at 6:31 PM No comments: