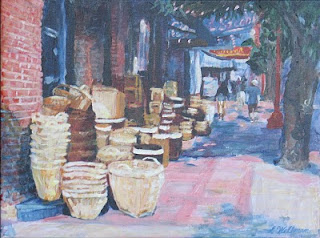 The current issue of "Art News" magazine reports on a fun competition for art handlers. "Accompanied by music from Chariots of Fire, Rocky, and The Price is Right, contestants hung pictures of kittens, packed up pizza boxes and trash by artists named Panini and Bruschetta, and assembled installations without instructions." The goal was "to spotlight the skills that we use" and to bring art handlers together as a community. Onlookers had styrofoam chickens to throw at contestants in "Speed Hanging" and "Static Hold" among other rounds. One art handler vouched for the authenticity - "what you see is exactly- as a parody- what we go through." I was amused to read this after another episode of "art handling" that I just went through. Along with a number of local artists, I was recently in a situation where there was an hour to bring in and arrange a display to assist a charitable foundation in its fund-raising. Meantime, everyone else, and the caterers too, were going lickety-split to assemble their areas. It was a bit frantic and wearing - and because of poor sound, the attendees appeared to have no idea as to why the artists were there at all! I felt we were regarded with the same lack of enthusiasm that results from the realization that to exit the castle/tourist-attraction, you have to leave via the gift shop. Anyway, I had a few good conversations and nobody threw styrofoam chickens.- and here is a painting shown recently- "Baskets" is 12" x 16" framed acrylic on canvas.
Posted by Loraine Wellman (lorainewellman@shaw.ca) at 2:34 PM No comments: