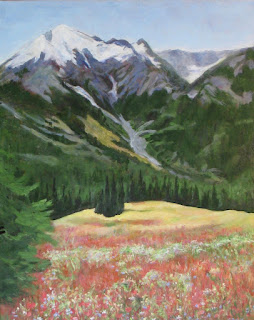 Whew! getting ready for DoorsOpen - paintings hung, labels added, cookies bought (alas! the rulings are no home-baked goodies), cups for coffee, a "beginning painting" started for the easel, floors cleaned, non-art stuff put away... Lots to do. The " beginning painting" was a new idea this year as I thought people might like to see the *very* beginning rather than a half-way through or almost-done painting.  So, the first compositional lines are marked down on an underpainting. I decided to try a sort of pink as the famous landscape artist John Constable often used that for his underpainting. It will be another "mountain hike" painting but different from this one. I've called this one "Alpine Meadow" and it is in the Mount Baker area. That is Mount Ruth, but I've not called it that in case artistic license overcame geographical reality. I hope it captures that fresh- air feeling. I love the way alpine meadows are always so "perfect" yet there is no human gardening done. Back home, we weed, mow, plant and fuss and don't achieve perfection. I just finished this painting about a week ago so it is truly "hot off the easel".  I'm looking forward to the reactions to it.
Posted by Loraine Wellman (lorainewellman@shaw.ca) at 4:50 PM No comments: 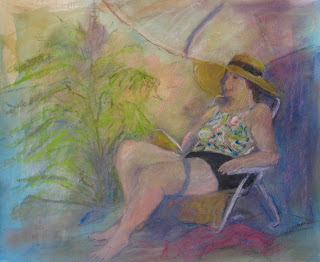 The weather has brightened - so maybe it won't be too long before this scene could be an outdoor one-instead of an indoor pose with a model. This is another one from the Friday Long Poses and, again, I worked in mixed-media, so it is a "pastel-plus" piece.

There has been much in the news about the National Gallery and the proposed sale of a  Marc Chagall painting in order to buy one by Jacques-Louis David. It seems all a tempest in a teapot since the David is going to stay in Quebec anyway. Looking at the two paintings from a purely personal point of view -"What would I want to hang on my wall?"- I would definitely pick the Chagall. I am not a huge Chagall fan but the colours are happier and I am less of a fan of biblical judgement-type paintings such as David's. It could be bit much looking as a skull everyday. However, the bigger question really is why  the National Gallery felt they had a right to make a choice and sell off a masterpiece they already owned? As it is, by withdrawing it from auction, they now have to pay a withdrawal fee that is really high. Since the Chagall was either a donation or  bought with taxpayer's funds in the first place, would it have been right to sell it? The fact that it has spent a lot of time in basement storage instead of display or loaned out to other Canadian galleries is a judgement call by the curator and should be neither here or there in regards to the selling. The painting sort of belongs to all of us. Now, paying the withdrawal fee means that there is even less money for future purchases. And, once again, all the real big-money action is on long-dead artists.
Posted by Loraine Wellman (lorainewellman@shaw.ca) at 12:17 PM No comments: