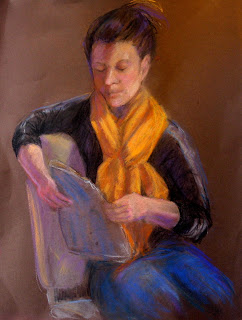 This is just over 2 hours work on our "long pose" which we have every couple of months at Life Drawing. I drew this last night. Our model wore street clothes and we had her sit a little sideways to get away from the more usual head-on pose. I was reasonably pleased with the results - although her right hand is a little confused - maybe the shadowing has to be clearer so the viewer knows there is a thumb on the other side of the newspaper!  I was able to take a photograph for further reference in case I decide to do a painting based on this pastel piece. Interestingly enough, when I looked at the photograph, all the colours that I found appealing in the pastel were just not there. If I was to do a commissioned portrait of a busy person - say too busy for regular "sittings"- I think I would want to do a pastel for reference as the photograph seems to almost deaden colour.
I'm not sure what she is reading in the paper- probably not news of investments that are on such a roller-coaster right now. People also get uptight about buying art and worry that it is not an "investment" - or else buy something because the signature would seem to indicate it *is* a good investment. Like a lot of artists, however, I can't guarantee a growth in investment - but is that important? Art that you enjoy is a great investment in the pleasure that you get from looking at it. It  will keep paying you back every time you look at it. A lot of art today is more for shock value- think shark in a tank of formaldehyde- and the more traditional idea of art being about beauty seems to be forgotten. If  a person wants something to bring them pleasure, then it would seem we have to return to the more traditional values in art.  Just buy something you want to look at- and it will pay you back in happiness dividends.
Posted by Loraine Wellman (lorainewellman@shaw.ca) at 9:06 PM No comments:

This painting was begun last year but recently completed. The model held a guitar with no strings so I had to complete that later with references. I'm not quite sure what to call it-- "Castles in Spain"? "Far away Places"? Hmmm- something to suggest that she is thinking about travel, inspired by the poster and wishing she was elsewhere.
I've been looking at catalogs from "Fine Art Auctions". They are all Canadian art - some I love and some I wouldn't want at any price, let alone what they are listed at. There are some outstanding Emily Carr ones - and some dreadfully dreary ones. She should have had a clean-out before she died. She did leave the sorting task to Lawren Harris - but then her sister rescued many from the "destroy" pile. You have  to do the destroying yourself, like  Robert Genn did. I have had more than one clean-out. A fellow artist I know finds it very hard to get rid of anything but I think that you have to look at your work and ask yourself if you were to die, would you want those left to represent your work? Let's face it, *everything* is not a masterpiece. Some pieces are experiments, some are learning efforts that could lead in new directions even if they don't quite make it except as #1 in the series, some are lacking in some basic element- "weeding" has to be done. Yet, there is also a lot of good work out there that gets little recognition. I was looking at some nudes in one of the catalogs and thinking that a lot of the work produced in our group sessions is certainly the equal....it just lacks the signature of an already-recognized artist.  Too bad people don't trust themselves and buy what they like as it would be possible to have a very fine collection at very reasonable prices - fractions of prices in the catalogs.
Catalog information is not always accurate- there are two Krieghoff's with obviously the same reference used for the male figure. The write-up for one paintings notes that the size is out of proportion to the other figures- but, in the other painting, there is the same dis-proportion with no mention. Then there is "Dorabell Lee", a watercolour by Emily Carr. The description refers to the figure as that of a child - but, it is obviously a doll -probably belonging to a child where Emily was staying to study in France. The proportions, the way it is lying down, the shapes of the arms, the face- it is a doll with a bisque head, probably bisque forearms - smoothly round-, and very slender legs . No doubt someone carved the sabots for its feet - and they are a bit large. If you look at other figure studies of actual people- and some are actual portraits- there is no doubt that Emily Carr was capable of doing a good figure or portrait study. No,  Dorabell Lee is not a child- it is a doll lying on the grass. Even the name is like a child's  made-up name for a doll, not so likely that of a real child in France. I wonder who bought the painting over 6 years ago- and I wonder if they realize the Dorabell Lee is a doll?  I haven't done any actual paintings of dolls, although I have done sketches. I'm a bit afraid of producing something on the sentimental side, so I have to admire the casualness of Dorabell Lee- just left on the ground. I think it was just an experiment with colours, using a subject that just happened to be there. I wonder if the owner ever knew that her doll was immortalized and would end up in a catalog with an estimated price of $30,000 to $70,000 ?

Posted by Loraine Wellman (lorainewellman@shaw.ca) at 8:31 PM No comments:

The big square- making a statement 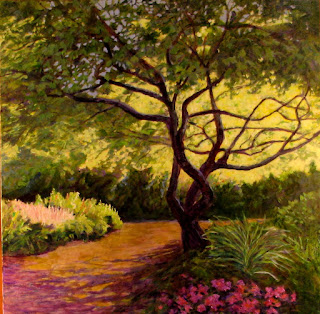 I just sent off my newsletter for January and I put this painting in it - only the format cut off some of the top and some of the bottom - so here is the "full square". It is 36" square, acrylic on canvas. It was created from a photograph. We had been painting in Queen Elizabeth Park. I had done another tree- working in pen and ink and watercolour. Then, as we went back up the path, the light was shining through this tree and I snapped a photograph. I felt it was an inspiration for a new beginning. There are actually words painted on the canvas - now obscured but still there. It is up in my newly redecorated bedroom where I am enjoying it. At one point, I had the focal point as the flower bed at the left, but after discussing it in a critique, realized that I had veered away from the original inspiration of the light through the tree. Lesson learned - remember what made you want to paint it in the first place! So some more sky came down into the painting and the front flowers were subdued and a little more variation happened in the tree limbs. Now it says what I wanted it to say.
Posted by Loraine Wellman (lorainewellman@shaw.ca) at 5:57 PM No comments:

Back to Life Drawing 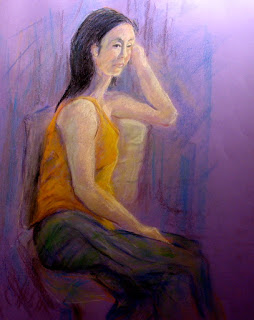 I'm looking forward to Life Drawing tonight - after not having any regular sessions over Christmas. This one was a long pose (last year!)  with Yui -in pastel -on - as is obvious here- mauve coloured Mi-Tientes paper. I thought it might be interesting to work on a cool  toned paper.  Yui is quite lovely with a long neck, long torso and an interesting flair with the clothes she wears. Every model has their own "presence" as well as appearance. There is also an interesting range of body language- some are strong and athletic, others very feminine in their movements. Then we have the male models with their variety too. When we are doing the short, warm-up drawings - one and two minutes- I often think that what I have drawn is not much. Then when I am sorting out papers - some just for recycling- I am sometimes surprised to see how much was captured in the quick gesture drawing. I also see a lot of good work around the room too.  Well, back at it tonight!
Posted by Loraine Wellman (lorainewellman@shaw.ca) at 4:59 PM No comments: