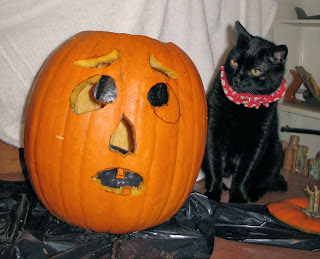 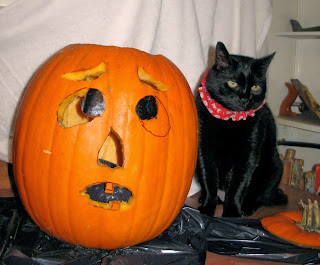 Hallowe'en Greetings from Digby - who declined to actually sit in the pumpkin to duplicate the Real Simple magazine cover. Digby is just wearing his usual collar and is not in a costume. Somebody commented that they like how the cats are "dressed".  However, it is not a fashion statement but collars to warn the birds and impede hunting prowess.  Collars are available from BirdsBeSafe and definitely seem  to work. Digby looks a bit critical - perhaps he thinks he could have done a better job if only I had handed over the knife.  ...Reminder... the GuessWho? sale is on November 2nd in the Pioneer Church at South Arm United, #3 and Steveston Highway.... lots of terrific paintings at only $100 each. None of Digby but there is another cat, several dogs, sea otters, various birds and other animals as well as landscapes, flowers, abstracts.... a great variety. One day only - 10 to 4
Posted by Loraine Wellman (lorainewellman@shaw.ca) at 10:24 AM No comments: 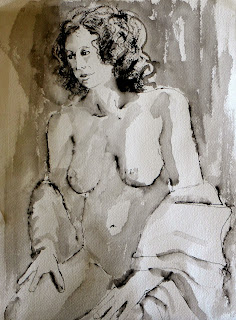 Yesterday a group of us were drawing and painting with a model. I had decided to just play. Adrienne Moore has done some terrific work using sticks dipped in ink. I tried it once and thought it seemed like fun because you just don't have quite the same control.  The sticks are pieces of dowelling that you break -preferably with holding your hands not too close together so you get a more jagged break. I also took some pieces of dried daylily stems to try as well. I wanted to work with sticks again- not to copy Adrienne, but to use the tools in my own way. I planned to use diluted ink with a Chinese brush as well.  I played around on some cheap paper - even for the one-minute quick poses. I did one on brown wrapping-type paper and put some white gouache on it as well- a bit different.   Then I  decided to try the back of a "failed" watercolour. What a difference good paper makes! On the cheap paper, the lines pretty well stayed put, but on the watercolour paper, coming back in with diluted ink on a Chinese brush, made the lines bleed in an interesting way. I like the bleeding lines in the hair and the drapery at the lower right, especially. I like the face although it is not a good portrait since the tools don't give enough control for real precision.  - but I felt that it was a successful experiment and made for an interesting morning.
Posted by Loraine Wellman (lorainewellman@shaw.ca) at 4:49 PM No comments:

Email ThisBlogThis!Share to TwitterShare to FacebookShare to Pinterest
Labels: Chinese brush and ink, drawing with sticks, the difference of quality paper, using sticks and ink to draw 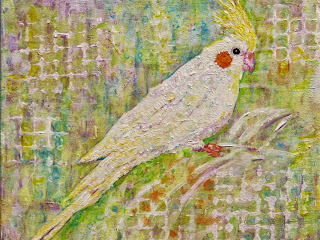 After doing two black cats in a more colourful way, I decided to do Adrienne's bird.  A white (mostly) creature but also done with lots of colour. The actual painting is a little more pastel - somehow it has darkened from I-photo to desktop to here.... Strange.... I did a little printing with a piece of mesh -for texture but also because this is a pet bird, not a free and wild native. I have a couple of "creature" paintings for GuessWho? but I can't show them yet as they have to remain a surprise for November 2nd!
Posted by Loraine Wellman (lorainewellman@shaw.ca) at 9:44 PM No comments: 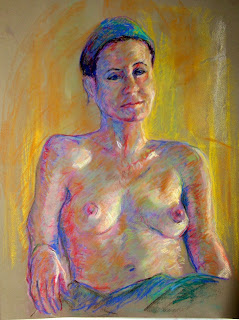 I'm thinking about risk today as, yesterday, I saw "The Highest Step in the World" at Gateway Theatre. The theme was said to be "risk" and, while I enjoyed it, I'm not so sure that came across as the main idea. The centre story was about Captain Joseph Kittinger and Project Excelsior but it also told the story of Icarus and the air stewardess who survived a plane crash with a long fall- Vesna Vulovic. The staging was very well done - I enjoyed all the  projected visual effects and the actual "flight" out over the audience. The acting was very good too. Mainly, it was the story.   I question whether Icarus - although interestingly portrayed as a bit of a young punk- belonged in a "real" story, since that is a myth. And, if we were to have him in the story - the grief of the father was a touching bit- there should have been, in my opinion more made of *why* he flew too high. Then we have Vesna, whose story has since been discredited by Guinness. (Not that it is *her* story since she has no memory of the crash- it may have been Soviet propaganda.)  However, even if it was really that high a fall, it was an accident and not planned. It was interesting how the incident made her a "heroine" -- a role she felt she did not deserve .  Instead, I would have liked to have more made of the motivation behind Kittinger's decision to take part in three parachute falls, especially to continue with the third when the compression glove on his right had failed. In fact- maybe I missed something- but I wasn't sure it was the third flight until I looked him up. I also wanted to know more about how his hand was- hands being a bit of an obsession with artists! Anyway, it was an interesting play and it did provoke some thinking about it afterward. I've also been thinking about more "risk" in art - as in -"why the heck not try this..."  Friday, we had a model and I decided to really push the colours. It seemed extreme and risky at the time, but the results, as seen above, don't seem that far out. So, I think more "risk" is what I'll be pursuing for the next while.
Posted by Loraine Wellman (lorainewellman@shaw.ca) at 12:09 PM No comments: